The History of Beer – When Was Beer Invented? 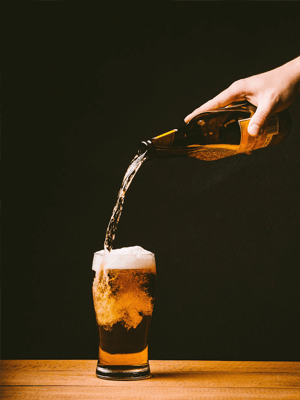 Once upon a time. An American archaeologist found the first known residue of barley beer in a jar at the Godin Tepe excavation site in western Iran.

It had, presumably, been sitting there since its last owner took his (or her) last sip around 3400BC.

And that’s not the only evidence beer has a long-established past. In 2004, archaeologists discovered a 5000-year-old brewery in China.

Two newly-excavated subterranean pits in Mijiaya, a site located in Shaanxi Province, had a variety of artefacts including clay wide-mouth pots, narrow-mouthed vessels, and funnels.

The team also dug up what looked like a primitive stove in each pit. And based on the particular pottery style, the archaeologists determined that the artefacts date back to the late Yangshao period, between 3,500 and 2,900 B.C.

However, no one knows the exact period man developed the first beer chug or keg stand. But one thing’s for sure- the ancient man enjoyed beers as much as (if not more than) we do. Here’s why:

While others contend that man created beer intentionally as an intoxicant. And that at some point, beer outpaced bread as a staple.

For example, scholar Max Nelson writes, “Fruits usually ferment through actions of wild yeast and the resultant alcoholic mixtures are often sought out by animals.”

He continues, “Pre-agricultural humans in the Neothelic Period also sought out such fermenting fruits and collected wild fruits in the hope that they would become intoxicating if left in the open air.”

Not only that. Various historical documents support the theory that humans intentionally brewed intoxicants like beer and wine. Other pieces of evidences on the presence of ancient beer include:

Countless Mesopotamian poems, paintings, and myths depict both gods and human beings enjoying beer, which they consumed via a straw to sift out herbs and pieces of bread in the drink.

For example, the famous poem, Hymn to Ninkasi, is both a recipe for beer and a song of praises to Ninkasi, the Sumerian goddess of beer. This poem was first written down around 1800 BCE.

Turns out, the Mesopotamian beer was thick like modern-day porridge. Historians also believe that Babylonians and Sumerians made their straws for drinking beer.

If anything, beer played an essential role in Egypt. It was often used as compensation for labour and just like with Mesopotamians, many Egyptians viewed beer a godly drink.

This stemmed from the belief that it was the great god Osiris himself who taught man how to brew beer.

Also, the Egyptian beer goddess, Tenenit, was closely associated with Maskhenet, protector of the birthing house and goddess of childbirth. Interesting, right?

Beer in Ancient Rome and Greece

All indications are that beer brewing knowledge travelled from Egypt to Greece. Yes, even the Greece word for beer, Zythos, comes from the Egyptian one, Zytum.

However, scholars note that beer was not so welcome in Greece as the Greeks preferred strong wine over beer. So did the Romans.

In fact, both the Greek and Roman culture considered beer a drink of low-class barbarians.

Xenophon, the Greek general and writer, in Book IV of his Anabasis, writes, “There were stores within of barley, wheat, vegetable, and wine made from barley (beer) in great big bowls; the grains of barley malt lay floating in the beverage up to the lip of the vessel…the beverage without admixture of water was very strong…it’s a taste you must acquire“.

The Germans started brewing beer, which they called ol (for “ale”) as early as 800 BCE. This info emanates from the fact that archaeologists encountered countless beer jugs with evidence of ancient beer in a Kasendorf Village tomb near Kulmbach in Northern Bavaria.

Beer in the Middle Ages

Beer was arguably the most popular drink during mediaeval times. Why? People of all social classes, from the eastern and northern parts of Europe, where grape cultivation was impossible or difficult, consumed beer daily.

What’s more, in the southern parts, where wine was more common, beer was still quite popular with the lower classes.

Interestingly, monks were the preeminent beer brewers during the mediaeval times considering that every monastery had a brewery on site.

Also, historians credit monks for many brewing innovations including the introduction of hops and the idea of cold storing or laagering beer to improve flavor.

Though the utilization of hops as a flavoring or bittering agent didn’t become common until the 12th century.

Before that time, brewers were using different spices and herbs to balance beer’s sweet malt flavors. Everything from bitter roots to dried flowers, spruce boughs, etc. found their way into beer.

It wasn’t until around the year 1150 that German monk brewers realized that hops acted as a natural preservative on top of adding a pleasing, thirst-quenching bitterness to beer.

In the mediaeval times, European beer-making was mostly a home activity. Things started to change around the 14th and the 15th centuries when beer brewing gradually moved from a family-oriented endeavour to an artisan one. It, thus, became common for monasteries and pubs to brew beer for mass consumption.

Eventually, the late Middle Ages saw the Northern Europe beer brewing industry become a large-scale export industry. The industry’s growth emanated from key innovations such as ‘hopping beer’, more frequent brewing and using larger kettle sizes, which helped to increase the consumption of beer. Not only that.

Originally developed in the German lands, these beer brewing innovations ended up becoming popular in the Netherlands and later England. It’s worth noting that English brewers had mixed feelings towards the use of hops, at first.

But by the 16th Century, they were ‘hopping’ all their beers and ales- something that the antiquary John Aubrey noted when he stated “Greeks, Heresies, Tuckey-cocks, and Beer. Came into England all in a year.”

That year, according to Aubrey, was the fifteenth of Henry VIII (1524). And ever since producers started exporting beer to England (and Ireland), it became such a crucial part of English life that the British Empire would send beer rations to its soldiers when it was occupying half of the modern world.

British brewers had discovered that brewing with extra hops and higher alcohol percentages allowed beer to last longer. Meaning it could survive even the longest of journeys.

Beer during the Industrial Revolution

Beer brewing industrialization became a reality following significant upgrades of the steam engine in 1975, which made it more efficient. Further developments affecting the beer brewing process would later come about after the introduction of the hydrometer in 1770 and the thermometer in 1760. These two gadgets enabled brewers to increase attenuation and production efficiency.

Before the late 18th Century, brewers dried malts over charcoal, straw, wood, and coke (after 1600) fires.

This meant that early malts had a smoky taste to their flavors because of the kilning process. In any case, brewers and maltsters tried their best to minimize this smoky taste due to its negative effects on drinkers.

As London and County Brewer noted in its document specifying the varieties of popular brown malts, “the straw-dried is the best, but the wood sort has the most unnatural taste, which few can bear with.”

Therefore, the hydrometer transformed how people brewed beer. Because before its introduction, breweries could only produce from a single malt. That is amber beers from amber malt, pale beers from pale malt, or brown beers from brown malt.

Using the hydrometer, beer makers could figure out the yield from various malts. So they soon realized that pale malts, though expensive, produce a far more fermentable product than other cheaper malts.

That’s when brewers switched from brown malts to mostly pale ones. Though they would supplement pale malt beers with a little colored malt to attain the desired color for darker beers.

Another invention that changed how brewers brewed their beers in the Industrial Revolution period was the drum roaster. Invented by Daniel Wheeler, the drum roaster allowed brewers to create dark, roasted malt, which led to flavours like stouts and porters.

Beer arrived in the modern world with the first European colonialists. According to journals by Pilgrims, the main reason why they stopped at Plymouth Rock was to make more beer since they were out of stock.

Indeed, the very first permanent structure Pilgrims built was a brewery. Americans would later pick up the art from these visitors, only to continue brewing ever since.

Cities like Philadelphia and New York were early American brewing centers. In fact, New York City alone had about 42 breweries in 1810. And almost all American beers at the time copied the English-style ales introduced by the colonists.

Things changed in the mid-1800s after new immigrants arrived from Central and Northern Europe, bringing with them new styles of beer that were popular back in their continent.  Like the pilsner-style lagers from the Czech Republic and Germany.

It didn’t take long for these hoppy, pale, clean-tasting beers to replace the darker, heavier ales that were typical of early American beers.

Thereafter, the influx of immigrants in America increased the demand for lager beer, which in turn drove beer production to new highs. Then came along Prohibition.

From 1920 to 1933, consuming any kind of alcoholic beverage was illegal in the U.S.A. Small brewpubs and regional breweries lost business and eventually closed down. Some breweries survived by producing malt extracts like sugar, soda, and ice cream.

After the US government repealed prohibition (1933), very few breweries rebounded from their 13 years in the wilderness. Many people had become poor and brand loyalty was heavily eroded.

As such, the only beers brands that became popular are those whose parent companies survived during Prohibition and, therefore, could mass-produce cheap drinks like Schlitz and Budweiser.

This trend of making cheap beers would continue until the late 1970s and early 1980s. In the meantime, European breweries and brewpubs that started as family businesses by European and German émigrés (during the Industrial Revolution) grew into big companies.

Also, advances in international and transcontinental shipping, refrigeration, as well as marketing and commerce have occasioned an international marketplace, whereby the average consumer has countless choices between styles and brands of foreign, national, regional, and local beers. Not only that.

The Next Time You Have a Beer…

Take note of the type of beer you’re having, its production date, and its country of origin. That should tell you more about where the drink in your hand comes from.

Beers are as old as mankind. And so every time you’re enjoying one, be sure to appreciate the rich history it comes with it.