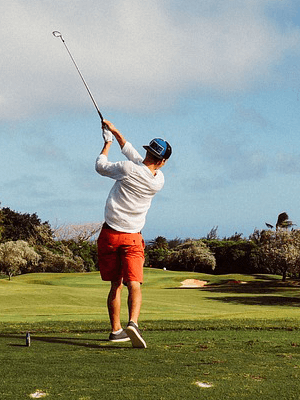 Tiger Woods is taking on new sponsorships that fit into his image…..

The Pope met with the College of Cardinals to discuss a proposal from Shimon Peres, the former leader of Israel. “Your holiness,” said one of the Cardinals, “Mr. Peres wants to determine whether Jews or Catholics are superior, by challenging you to a golf match.” The Pope was greatly disturbed, as he had never held a golf club in his life.

“Not to worry,” said the Cardinal, “we’ll call America and talk to Jack Nicklaus. We’ll make him a Cardinal, he can play Shimon Peres… We can’t lose!” Everyone agreed it was a good idea. The call was made and, of course, Jack was honored and agreed to play.

The day after the match, Nicklaus reported to the Vatican to inform the Pope of his success in the match. “I came in second, your Holiness,” said Nicklaus.

“Second?!!” exclaimed the surprised Pope. “You came in second to Shimon Peres?!!”

Fred got home from his Sunday round of golf later than normal and very tired. “Bad day at the course?” his wife asked.

“Everything was going fine,” he said. “Then Harry had a heart attack and died on the 10th tee.”

A man is stranded on a desert island, all alone for ten years. One day, he sees a speck in the horizon. He thinks to himself, “It’s not a ship.” The speck gets a little closer and he thinks, “It’s not a boat.” The speck gets even closer and he thinks, “It’s not a raft.” Then, out of the surf comes this gorgeous blonde woman, wearing a wet suit and scuba gear. She comes up to the guy and says, “How long has it been since you’ve had a cigarette?”

She reaches over and unzips a waterproof pocket on her left sleeve and pulls out a pack of fresh cigarettes.

Then she asked, “How long has it been since you’ve had a drink of whiskey?”

She reaches over, unzips her waterproof pocket on her right sleeve, pulls out a flask and gives it to him.

He takes a long swig and says, “Wow, that’s fantastic!”

Then she starts unzipping a longer zipper that runs down the front of her wet suit and she says to him, “And how long has it been since you’ve had some real fun?”

And the man replies, “Wow! Don’t tell me that you’ve got golf clubs in there!”

A pastor, a doctor and an engineer were waiting one morning for a particularly slow group of golfers.

Engineer: What’s with these guys? We must have been waiting for 15 minutes!

Doctor: I don’t know, but I’ve never seen such ineptitude!

Pastor: Hey, here comes the greens keeper. Let’s have a word with him. [dramatic pause] Hi George. Say, what’s with that group ahead of us? They’re rather slow, aren’t they?

George: Oh, yes, that’s a group of blind fire fighters. They lost their sight saving our clubhouse from a fire last year, so we always let them play for free anytime.

The group was silent for a moment.

Pastor: That’s so sad. I think I will say a special prayer for them tonight.

Doctor: Good idea. And I’m going to contact my ophthalmologist buddy and see if there’s anything he can do for them.

Engineer: Why can’t these guys play at night?

A young man who was also an avid golfer found himself with a few hours to spare one afternoon. He figured if he hurried and played very fast, he could get in nine holes before he had to head home. Just as he was about to tee off an old gentleman shuffled onto the tee and asked if he could accompany the young man as he was golfing alone. Not being able to say no, he allowed the old gent to join him.

To his surprise the old man played fairly quickly. He didn’t hit the ball far, but plodded along consistently and didn’t waste much time. Finally, they reached the 9th fairway and the young man found himself with a tough shot. There was a large pine tree right in front of his ball – and directly between his ball and the green.

After several minutes of debating how to hit the shot the old man finally said, “You know, when I was your age I’d hit the ball right over that tree.”

With that challenge placed before him, the youngster swung hard, hit the ball up, right smack into the top of the tree trunk and it thudded back on the ground not a foot from where it had originally lay.

The old man offered one more comment, “Of course, when I was your age that pine tree was only three feet tall.”

After a particularly poor game of golf, a popular club member skipped the clubhouse and started to go home. As he was walking to the parking lot to get his car, a policeman stopped him and asked, “Did you tee off on the sixteenth hole about twenty minutes ago?”

“Did you happen to hook your ball so that it went over the trees and off the course?”

“Well,” said the policeman very seriously, “Your ball flew out onto the highway and crashed through a driver’s windshield. The car went out of control, crashing into five other cars and a fire truck. The fire truck couldn’t make it to the fire, and the building burned down. So, what are you going to do about it?”

The golfer thought it over carefully and responded…

“I think I’ll close my stance a little bit, tighten my grip and lower my right thumb.”