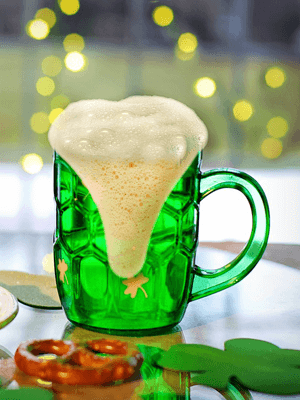 A Irishman and a German are the only survivors of a plane crash on an island. They are walking around looking for food when the German finds a bottle. He rubs it and a genie appears.

The genie says, “I will grant each of you one wish. But, I must warn you, whatever you wish for, the other man gets twice as much of.”

The German goes first. He says “I’ll have a glass of Dortmunder Pilsner Beer. That way that Irish bastard will get two glasses of it, and see what a real beer tastes like.

So the genie nods, and suddenly the German is holding a glass of fine German beer, and Irishman is holding two glasses of the same beer. The German says “Now taste a real beer, not that Guinness sewage!”

The genie then turns to the Irishman and says “Now it’s your turn, but remember the German will get twice what you wish for.”

The Irishman says “Genie, see that stick over there? Beat me half to death with it.”

Old Man McQuillan walked into a bar and ordered martini after martini, each time removing the olives and placing them in a jar. When the jar was filled with olives and all the drinks consumed, the Irishman started to leave.

“S’cuse me,” said a customer, who was puzzled over what McQuillan had done. “What was that all about?”

“Nothing,” said the Irishman, “my wife just sent me out for a jar of olives.”

Paddy O’Connell was staggering home with a pint of booze in his back pocket when he slipped and fell. Struggling to his feet, he felt something wet running down his leg. “Please, God,” he implored, “let it be blood!”

His wife had been killed in an accident and the police were questioning Finnegan.

“Did she say anything before she died?” asked the sergeant.

“Well, she spoke without interruption for about forty years,” said the Irishman.

Two Irishmen are walking up a hill and they see a head roll by them. The first Irishman says “Wasn’t that old Paddy O’Tool? The second Irishman says “I thought he was taller than that!”

Three Englishmen were in a bar and spotted an Irishman. So, one of the Englishmen walked over to the Irishman, tapped him on the shoulder, and said, “Hey, I hear your St. Patrick was a drunken loser.”

Shocked beyond belief, the Englishman went back to his buddies. “You’re right. He’s unshakable!”

“Yeah, that’s what your buddies were trying to tell me.”

A young Irish boy said to his grandfather. “Make a frog noise for me Grandad.”

“No, son, I don’t feel like making a frog noise right now”

“Why is it so important to you that I make a frog noise?”

“Mom says when you croak we can have this house”