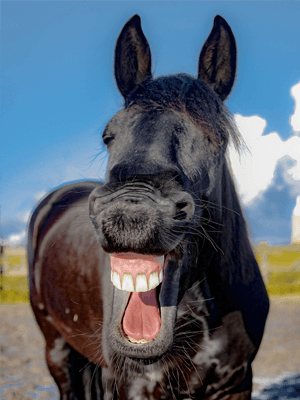 A bum comes up to the front door of a very expensive house and raps gently on the door. When the rich owner answers, the bum asks him, “Please, sir, could you give me something to eat? I haven’t had a good meal in several days.”

The owner says, “I have made a fortune in my lifetime by supplying goods for people. I’ve never given anything away for nothing. However, if you go around the back, you will see a gallon of paint and a clean paint brush. If you will paint my porch, I will give you a good meal.”

So the bum goes around back and a while later he again knocks on the door. The owner says, “Finished already? Good. Come on in. Sit down. The cook will bring your meal right in.”

The bum says, “Thank you very much. But there’s something that I think you should know. It’s not a porch you got there. It’s a BMW.”

A group of girlfriends are on vacation when they see a 5-story hotel with a sign that reads: “For Women Only”. Since they are without their boyfriends and husbands, they decide to go in.

The bouncer, a very attractive guy, explains to them how it works. “We have 5 floors. Go up floor by floor, and once you find what you are looking for, you can stay there. It’s easy to decide since each floor has a sign telling you what’s inside.”

So they start going up and on the first floor the sign reads: “All the men on this floor are short and plain.” The friends laugh and without hesitation move on to the next floor.

The sign on the second floor reads: “All the men here are short and handsome.”

Still, this isn’t good enough, so the friends continue on up.

They reach the third floor and the sign reads: “All the men here are tall and plain.” They still want to do better, and so, knowing there are still two floors left, they continued on up.

On the fourth floor, the sign says: “All the men here are tall and handsome. They are rich and perfectly built”

The women get all excited and are going in when they realize that there is still one floor left. Wondering what they are missing, they head on up to the fifth floor. There they find a sign that reads: “There are no men here. This floor was built only to prove that there is no way to please a woman.”

There was a cop on his horse waiting to cross the road when a little boy on his new shiny bike stopped beside him.

The cop looked at the bike and while handing the boy a $20 ticket he said, ”Next year, tell Santa to put a license plate on the back of it.”

To go along with the cop, the little boy said, ‘‘nice horse you got their sir, did Santa bring it to you?” ”Yes, He sure did,” said the cop.

The little boy looked up at the cop and said, ”Next year tell Santa to put the dick underneath the horse instead of on top.”

There were these two guys out hiking when they came upon an old, abandoned mine shaft. Curious about its depth they threw in a pebble and waited for the sound of it striking the bottom, but they heard nothing. They went and got a bigger rock, threw it in and waited. Still nothing. They searched the area for something larger and came upon a railroad tie. With great difficulty, the two men carried it to the opening and threw it in. While waiting for it to hit bottom, a goat suddenly darted between them and leapt into the hole!

The guys were still standing there with astonished looks upon their faces from the actions of the goat when a man walked up to them. He asked them if they had seen a goat anywhere in the area and they said that one had just jumped into the mine shaft in front of them! The man replied, “Oh no. That couldn’t be my goat, mine was tied to a railroad tie.”