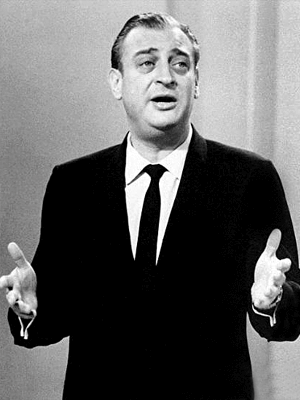 My wife and I were happy for twenty years. Then we met.

I’ll tell ya, my wife and I, we don’t think alike. She donates money to the homeless, and I donate money to the topless!

One night I came home. I figured, let my wife come on. I’ll play it cool. Let her make the first move. She went to Florida.

I asked my old man if I could go ice-skating on the lake. He told me, “Wait til it gets warmer.”

My doctor told me to watch my drinking. Now I drink in front of a mirror. I drink too much. Way too much. My doctor drew blood. He ran a tab.

Do you like Rodney Dangerfield? Check out these products on Amazon:

When I was born the doctor came out to the waiting room and said to my father, “I’m very sorry. We did everything we could…but he pulled through.”

I come from a stupid family. During the Civil War my great uncle fought for the west!

My father was stupid. He worked in a bank and they caught him stealing pens.

My mother had morning sickness after I was born.

My mother never breast fed me. She told me that she only liked me as a friend.

My father carries around the picture of the kid who came with his wallet.

When I played in the sandbox the cat kept covering me up.

I could tell that my parents hated me. My bath toys were a toaster and a radio.

One year they wanted to make me poster boy… for birth control.

I remember the time I was kidnapped and they sent back a piece of my finger to my father. He said he wanted more proof.

My uncle’s dying wish was to have me sitting on his lap. He was in the electric chair.

One time I went to a hotel. I asked the bellhop to handle my bag. He felt up my wife!

This morning when I put on my underwear I could hear the Fruit of the Loom guys laughing at me.

I’m a bad lover. Once I caught a peeping tom booing me.

My wife only has sex with me for a purpose. Last night she used me to time an egg.

It’s tough to stay married. My wife kisses the dog on the lips, yet she won’t drink from my glass!

My wife isn’t very bright. The other day she was at the store, and just as she was heading for our car, someone stole it! I said, “Did you see the guy that did it?” She said, “No, but I got the license plate.”

Last night my wife met me at the front door. She was wearing a sexy negligee. The only trouble was, she was coming home.

A girl phoned me and said, “Come on over. There’s nobody home.” I went over. Nobody was home!

A hooker once told me she had a headache.

I went to a massage parlor. It was self service.

If it weren’t for pick-pocketers, I’d have no sex life at all.

Once when I was lost I saw a policeman and asked him to help me find my parents. I said to him, “Do you think we’ll ever find them?” He said, “I don’t know kid. There are so many places they can hide.”

I remember I was so depressed I was going to jump out a window on the tenth floor. They sent a priest up to talk to me. He said, “On your mark…”

When my old man wanted sex, my mother would show him a picture of me.

I had a lot of pimples too. One day I fell asleep in a library. I woke up and a blind man was reading my face.

My wife made me join a bridge club. I jump off next Tuesday.

Last week my tie caught on fire. Some guy tried to put it out with an ax!

I met the surgeon general. He offered me a cigarette.

I was making love to this girl and she started crying. I said, “Are you going to hate yourself in the morning?” She said, “No, I hate myself now.”

I knew a girl so ugly that she was known as a two-bagger. That’s when you put a bag over your head in case the bag over her head breaks.

I knew a girl so ugly, they use her in prisons to cure sex offenders.

I knew a girl so ugly, I took her to the top of the Empire State building and planes started to attack her.

I knew a girl so ugly, the last time I saw a mouth like hers it had a hook on the end of it.

I knew a girl so ugly, she had a face like a saint–a Saint Bernard!

I was tired one night and I went to the bar to have a few drinks. The bartender asked me, “What’ll you have?” I said, “Surprise me.” He showed me a naked picture of my wife.

During sex my wife always wants to talk to me. Just the other night she called me from a hotel.

My marriage is on the rocks again. Yeah, my wife just broke up with her boyfriend.

One day as I came home early from work, I saw a guy jogging naked. I said to the guy, “Hey buddy…why are you doing that for?” He said, “Because you came home early.”

I went to see my doctor… Doctor Vidi-boom-ba. Yeah…I told him once, “Doctor, every morning when I get up and look in the mirror I feel like throwing up. What’s wrong with me? He said, “I don’t know, but your eyesight is perfect.”

I told my dentist my teeth are going yellow. He told me to wear a brown necktie.

My psychiatrist told me I’m going crazy. I told him, “If you don’t mind, I’d like a second opinion.” He said, “All right. You’re ugly too!”

I was so ugly, my mother used to feed me with a slingshot!

When I was born the doctor took one look at my face, turned me over and said, “Look, twins!”

And we were poor too. Why, if I wasn’t born a boy, I’d have nothing to play with!

With my wife I don’t get no respect. I made a toast on her birthday to ‘the best woman a man ever had.’ The waiter joined me.

I’m not a sexy guy. I went to a hooker. I dropped my pants. She dropped her price.

I tell you, I’m not a sexy guy. I was the centerfold for Playgirl magazine. The staples covered everything!

What a childhood I had, why, when I took my first step, my old man tripped me!

Last week I told my psychiatrist, “I keep thinking about suicide.” He told me from now on I have to pay in advance.

I tell ya when I was a kid, all I knew was rejection. My yo-yo, it never came back!

When I was a kid I got no respect. The time I was kidnapped, and the kidnappers sent my parents a note they said, “We want five thousand dollars or you’ll see your kid again.”

I tell ya, my wife was never nice. On our first date, I asked her if I could give her a goodnight kiss on the cheek – she bent over!

I tell you, with my doctor, I don’t get no respect. I told him, “I’ve swallowed a bottle of sleeping pills.” He told me to have a few drinks and get some rest.

Some dog I got too. We call him Egypt because he leaves a pyramid in every room.

With my dog I don’t get no respect. He keeps barking at the front door. He don’t want to go out. He wants me to leave.

What a dog I got. His favorite bone is in my arm!

Last week I saw my psychiatrist. I told him, “Doc, I keep thinking I’m a dog.” He told me to get off his couch.

I worked in a pet store and people kept asking how big I’d get.