The History of Mead – When Was Mead Invented? 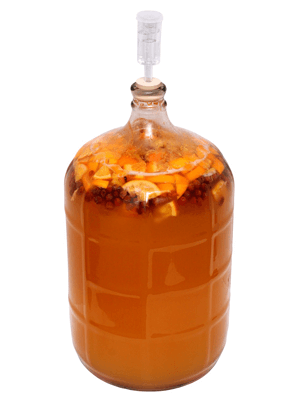 The history of mead may go back more than 8,000 years. The oldest known meads were created on the Island of Crete.

Wine had not yet been created. Mead was the drink of the Age of Gold, and the word for drunk in classical Greek remained “honey-intoxicated.”

Mead was once very popular in Northern Europe, often produced by monks in monasteries in areas where grapes could not be grown.

It faded in popularity, however, once wine imports became economical. Especially partial to it were the Slavs. In Polish it is called miód pitny (pronounced [mjut pi:tni]), meaning “drinkable honey”.

Mead was a favored drink among the Polish-Lithuanian szlachta (nobility). During the Crusades, Polish Prince Leszek I the White explained to the Pope that Polish knights could not participate in the Crusades because there was no mead in Palestine.

In Norse mythology, mead was the favorite drink of the Norse gods and heroes, e.g. in Valhalla, and the mead of the giant (Jotun) Suttung, made from the blood of Kvasir, was the source of wisdom and poetry.

The nectar and ambrosia of the Greek gods are often thought of as draughts of fermented honey.

In Russia, mead remained popular as medovukha and sbiten long after its popularity declined in the West. Sbiten is often mentioned in the works by 19th-century Russian writers, including Gogol, Dostoevsky, and Tolstoy. Some beer producers attempt to revive sbiten’ as a mass-produced drink in Russia.

In Finland, a sweet mead called Sima (cognate with zymurgy), is still an essential seasonal brew connected with the Finnish Vappu (May Day) festival. It is usually spiced by adding both the pulp and rind of a lemon.

During secondary fermentation raisins are added to control the amount of sugars and to act as an indicator of readiness for consumption — they will rise to the top of the bottle when the drink is ready.

Ethiopian mead is called tej and is usually home-made. It is flavored with the powdered leaves and bark of gesho, a hops-like bittering agent which is a species of buckthorn.

A sweeter, less-alcoholic version called berz, aged for a shorter time, is also made. The traditional vessel for drinking tej is a rounded vase-shaped container called a berele.

Evidence exists that mead was also made in India, Southeast Asia, China, Japan, and Central Africa. Mead is also mentioned in many old north Anglo-Saxon stories, including in the epic poem Beowulf, and in early Welsh poetry such as Y Gododdin.

The word “honeymoon” in English is supposedly traceable to the practice of a bride’s father dowering her with enough mead for a month-long celebration in honor of the marriage.

Mead is still manufactured in Britain, France, and various other locations, though the traditional status of most such manufacture is dubious.

One of the most famous producers is the Holy Island of Lindisfarne in North East England, where mead has been produced since Anglo-Saxon times.

Mead can have a wide range of flavors, depending on the source of the honey, additives called “adjuncts” or “gruit” (including fruit and spices), yeast employed during fermentation, and aging procedure.

Blended varieties of mead can be known by either style represented. For instance, a mead made with cinnamon and apples can be referred to as a cinnamon cyser or as an apple metheglin.

Some meads retain some measure of the sweetness of the original honey, and some can even be considered as dessert wines. Drier meads are also available, and some producers offer sparkling meads, which (like champagne) can make for a delightful celebratory toast.

There are a number of faux-meads, which are actually cheap wines with large amounts of honey added, to produce a cloyingly sweet liqueur. It has been said that “a mead that tastes of honey is as good as a wine that still tastes of grape”.

Historically, meads would have been fermented by wild yeasts and bacteria [citation needed] residing on the skins of the fruit or within the honey itself. Wild yeasts generally provide inconsistent results, and in modern times various brewing interests have isolated the strains now in use.

Certain strains have gradually become associated with certain styles of mead. Mostly, these are strains that are also used in beer or wine production. Several commercial labs, such as White Labs, WYeast, Vierka, and others have gone so far as to develop strains specifically for mead.

Mead can also be distilled to a brandy or liqueur strength. Krupnik is a sweet Polish liqueur made through just such a process.

Different types of mead include, but are not limited to: