People have been drinking beer around the world for ages. This popular alcoholic beverage is made through the brewing and fermentation of cereal grains with hops, yeast, and flavoring agents. 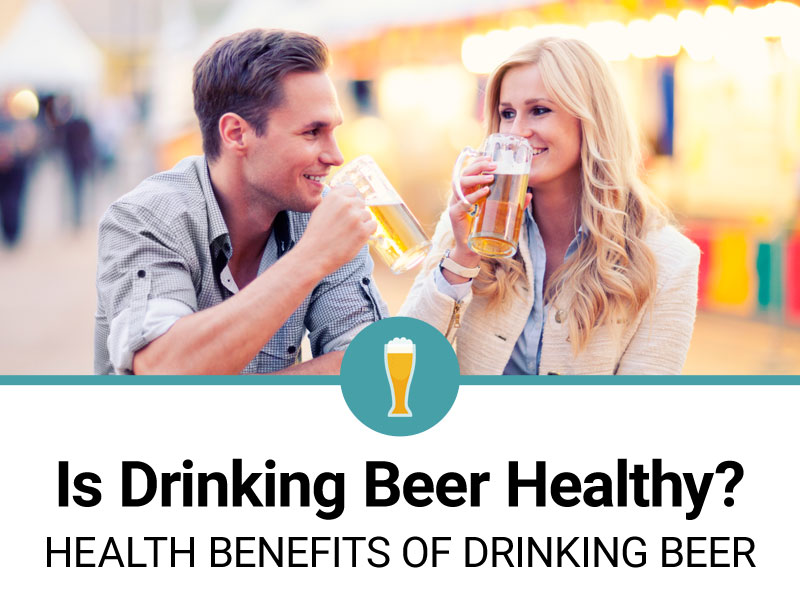 As concerns alcohol, most people assume that the only beverage with health benefits is wine in moderation. Beer to them is just a guilty pleasure associated with weight gain and a beer gut.

When beer is consumed in moderation, however, it also has immense health benefits.

According to the dietary guidelines for Americans, moderate beer consumption is one drink per day for ladies and not more than two for men.

In this instance, one drink is equivalent to 12 fluid ounces (5% alcohol content) of regular beer.

Beer is not just empty calories. It contains micronutrients from the yeast and cereal grains used in its brewing.

The following are the seven health benefits of drinking beer in moderation.

The average beer bottle contains B vitamins including B6 (pyridoxine), B3 (niacin), B9 (folic acid) and B12 (cobalamin).

Beer contains the highest amounts of B vitamins when compared to other alcoholic drinks.

B vitamins are crucial building blocks of healthy bodies and affect your energy levels, immunity, cell metabolism, and brain function.

In men, B vitamins have been linked to increased testosterone levels that naturally decrease with age. They can also increase muscle strength. Most of the benefits of B vitamins in women are related to pregnancy and breastfeeding.

The Center for Disease Control, however, advises against beer consumption in pregnant women. Those who are breastfeeding, on the other hand, should get medical advice on their alcohol consumption.

Kidney stones comprise salts and minerals that crystallize in the urinary tract. While small stones are often passed out in urine, large ones block the urethra, bladder, or ureters.

This blockage causes excruciating pain that might, at times, necessitate surgery. According to a Finnish study published in the Clinical Journal of the American Society of Nephrology, drinking beer will help keep kidney stones at bay.

The best for preventing kidney stones are dark beers, including stouts, porters, and those with high amounts of hops. These beers avert the deposition of calcium that will crystallize and form stones.

Moreover, beer comprises 90% water, a powerful weapon for flushing your kidneys and preventing the accumulation of salts and minerals. The Finnish study concluded that consumption of beer reduces the formation of kidney stones by 40%.

Beer is a major source of soluble dietary fiber from the cell walls of its primary ingredient, malted barley. Soluble fiber is the same one found in beans, peas, oats, carrots, citrus fruits, and psyllium.

Besides promoting healthy bowel function, fiber will slow down the digestion of foods and allow your body to absorb as many nutrients as it can from what you consume.

The slowed-down absorption of the sugar in your food will improve sugar regulation in people with diabetes.

It also makes you feel full for a long time, meaning you will consume less food and lose weight. Furthermore, fiber reduces cholesterol levels that, in turn, reduces your risk of cardiovascular disease.

According to a study on the National Center for Complementary and Integrative Health website, heart disease is among the leading causes of death in the U.S.

Several studies have linked the consumption of light and moderate beer with a low risk of contracting heart disease.

In a 2016 study in which 80000 Chinese adults participated, moderate beer consumption was linked with a slow reduction in HDL (high density lipoprotein). This is good cholesterol, and its increase protects your heart.

The benefit of beer for your heart’s health is primarily linked to its high polyphenol content based on a 2012 research.

Other than lowering your risk of cardiac disease, beer will boost the health of people who have suffered a heart attack.

A 2012 study by Harvard researchers determined that men who had suffered a heart attack had a 42% less risk of dying within 20 years when they consumed beer in moderation daily.

Excess consumption of beer has been associated with damage to the heart muscles by numerous studies. You thus should be careful to take just the right amount for cardioprotection.

Beer Is Good For Bones

Beer might just have surpassed milk as the best thing for your bones. According to an article in the International Journal of Endocrinology, moderate beer consumption in men increases bone density.

This increase has been associated with the high silicon content of malted barley. Silicon is among the primary ingredients that strengthen bones and keep osteoporosis at bay.

Osteoporosis is a common disease in those with advanced age. It results in the deterioration of bone tissue and decreases bone mass increasing the risk of pathological fractures and bone pain.

Beer has also been shown to boost bone density in postmenopausal women according to research published in the American Journal of Epidemiology.

This is particularly important because the hormonal changes that characterize the postmenopause period will decrease a woman’s bone density and place her at high risk of fractures.

Other than bone health, silicon in beer will protect the brain from the harmful effects of aluminum. Aluminum in excess amounts has been linked with an increased risk of Alzheimer’s. According to a 2019 publication in the Nutrients Journal, silicon will decrease the uptake of aluminum and protect your brain.

Hops are among the four main ingredients of beer. These are the dried flowers that lend your beer a bitter and somewhat grassy taste.

This flavor can be tropical or flowery based on the beer variety you choose and its additional ingredients. Other than their flavor profile, hops have anti-inflammatory properties.

In research published in the Molecular Nutrition and Food Journal, hops were found to interfere with the working and growth of inflammation-causing compounds.

One of these compounds is known as ferulic acid. It is a potent antioxidant that protects the skin from damage by UV rays. To this end, it protects you against premature skin aging and skin cancer.

There is also another antioxidant called xanthohumol. This fends off the enzymes that cause certain types of cancer.

In a 2015 Chinese study in rats, it was found to prevent oxidative damage to brain cells. A bottle of beer a day will reduce your risks of getting cancer, particularly prostate and breast cancer.

Dark beers have a higher antioxidant content compared to light ones.

The bitter acids in beer have been linked to a boost in digestion. The B vitamins in it will break down and convert the nutrients from the carbohydrates, proteins, and fats you consume.

On the other hand, the polyphenols in beer have a prebiotic and anti-inflammatory effect on your gut.

This prebiotic effect will stimulate the growth of healthy bacteria and protect the stomach from the impact of harmful bacteria.

Bitter beers are the best for digestion since they have a high polyphenol content.

There also exists evidence that moderate beer consumption will increase the levels of a bacterial strain named Bacteroides thetaiotaomicron.

A 2012 study included in the Journal of Agricultural and Food Chemistry considered five Austrian and German beers. It concluded that the beers triggered the production of gastric acid from gastrointestinal cells.

Gastric acid is pivotal in digesting food and controlling the growth of harmful gut bacteria. A high concentration of bitter acids in beer induced a higher response of the stomach cells.

For most people, the consumption of beer only serves a social purpose as it helps people lose inhibitions without going overboard. This is vital, particularly for people who are not the life of the party.

In addition to this, the above tidbits prove that beer might be one of the best drinks to include in your daily life.

You need not necessarily drink beer for you to harness its benefits. You can also cook with it.

When cooking with beer, its exposure to heat for a long time dissipates its alcohol content. If, for instance, you have the beer simmering for an hour, you will retain only 25% of its alcohol amount.

You can consider using dark beers for your chills and stews or adding them to chicken, beef, and pork marinades.

Light macaroni and cheese with whole-grain pasta and roasted cauliflower will also taste heavenly with a hint of beer as will sautéed vegetables cooked on stovetops.