What is Beer Made Of? – Beer Main Ingredients

The primary ingredients used in beers across the world are water, barley, hops, and yeast. 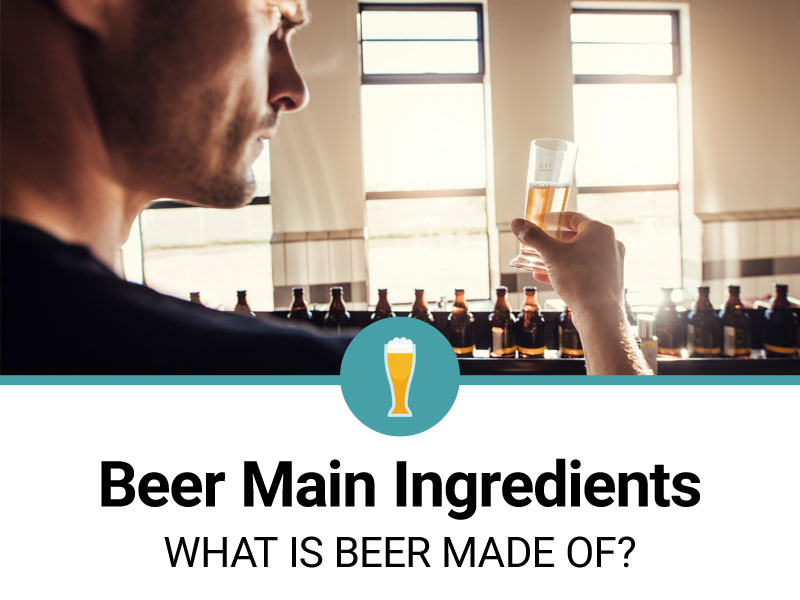 The brewing process was perfected centuries back, and brewers continue to rely on these ingredients to make their beverages.

Some brewers will use different grains to add flavor and texture to beer, including wheat malt, flaked oats, and crystal malt. The main ingredients of beer are: 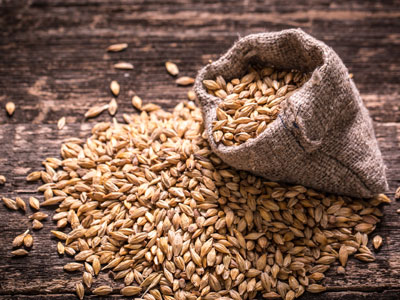 The cereal barley is grown in nations like Russia, Canada, Turkey, the US, and Germany. As a cereal, it is not particularly suitable for baking or milling into flour, but it is ideal for beer making.

Barley contains proper husk, which improves the effectiveness of the wort separation process during brewing. I

t also germinates easily even in low temperatures, and it has active enzymes like beta- and alfa amylases that promote the natural fermentation process.

Barely is grown in several types, each of which is suited for different beer styles. US-based brewers favor six-row barley, partly because it is economical to cultivate.

This barley has the high enzyme-count required to convert the starch in adjunct lagers into sugars.

European brewers mostly prefer the two-row barley, because it has plumper kernels, and it malts best. The barley has lower protein concentrations and thinner husks in comparison to the six-row barley.

In its natural form, barley cannot be used in the brewing process because it has complex sugars that are not fermentable.

Malting encourages the enzymes in the grains to form, which will then break the starches into fermentable sugars like maltose.

The malting process unfolds in several steps that begin with the barley being soaked in water. The water will trigger germination in the grain.

Brewers are often keen to stop the germination process at the right time. If stopped too early, there will be starches that could have been transformed into sugars, and the malt will be under-modified.

Over-modified malt comes about when the barley begins consuming its sugars. Timing is, therefore, very critical for every maltster.

The grain is subsequently roasted, and the fermentation process is started.

The level of heating determines the kind of beer that will be produced. The color of the beer also depends on this amount of heat. A pale beer is produced from lightly-roasted malt, while intensely-roasted kinds produce dark beer.

Pale ale, for example, is made from lightly-roasted barley and ale yeast. Once more heat is added, you get varieties like Scottish ales and Brown ales.

Deeply-roasted malts will be used to make porters and stouts and black lagers. Enthusiasts of stouts favor the burnt-toast flavor that comes with the heavily-roasted malt.

A prevailing belief is that dark beers are more potent than lighter varieties. The richness in the darker beers may, however, be due to the unfermented starches in the beer, and not due to the presence of more alcohol.

In addition to barley, there are other grains that are used to influence the taste and texture of beer. Specialty malts add color, flavor, and aroma while boosting head retention.

Oats are sometimes added to barley to create a creamy and full-bodied beverage, and stouts will commonly have this characteristic. Rice will dry the brew’s body and create a dry appeal.

Wheat is added to barley when a brewer wants a fuller body and a foamy head. Ryes will add a crisp and subtle note to a beer, and they can also create a caramel or chocolate attribute. 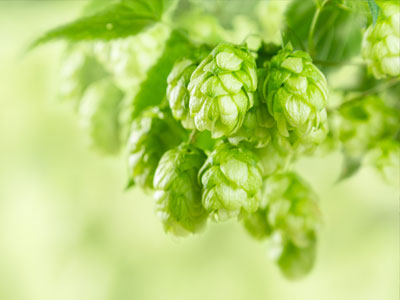 Hops are mainly used to flavor beer by neutralizing the sweetness of the malt.

When compared to the other ingredients used to make beer, hops are actually a newcomer. Brewers had made beer for about 8,000 years before they started adding the flowers.

Hops had been used as herbs for centuries, but it was not until 822 AD that they were used in beer in Picardy, France, according to historical records.

German brewers warmed up to the use of hops 300 years later, but the ingredients became widely popular in the 13th century. Hops were cultivated in America in the 1600s.

Hops are the cone-shaped flowers of the Humulus lupulus plant. The plant is included in the family Cannabinaceae with cannabis. They provide beer with aroma, stability, flavor, and bitterness.

Hops have high concentrations of alpha acids, which are the main bittering agents that brewers are concerned with.

They also have the essential acids that give different beers their signature notes and aromas. Hops also served as natural preservatives before the advent of refrigeration.

Hops also come in various styles. Different strains and those grown from varying regions will influence beers in their own ways. Hops strains mainly differ in the concentrations of alpha acids and essential oils.

Those with a lot of essential oils provide the most flavors and aromas, while a lot of alpha acids will lend a sharp bitterness to the brew.

The qualities of hop have even given rise to particular styles of beer, like the Indian pale ale.

There are three main types of hops, that is English hops, Noble hops, and American hops.

Noble hops are mostly cultivated in the Czech Republic and Germany, and they give the flavors associated with beers from these areas.

They have low amounts of alpha acids but are rich in the essential oil humulene.

American hops have citrus and pine notes, thanks to the high concentrations of the essential oil myrcene.

English hops, on the other hand, are mild and delicate with subtle flavors and notes, including wood, earth, and spices. They are mostly used to make traditional English ales.

Hops are added to the wort, which is the byproduct of the mashing process. Wort is produced after the grains are steeped in hot water to trigger the enzymes to convert the starch into fermentable sugars.

Wort must be boiled, which is when the hots are added in stages to impact aromas and bitterness. 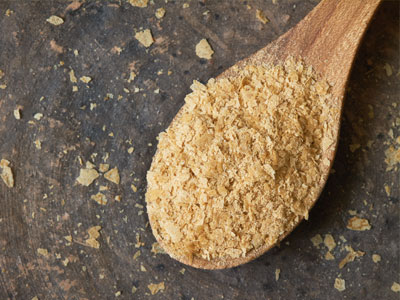 The single-cell microorganism called yeast is fundamental to the brewing process. It consumes simple sugars and produces alcohol as well as carbon dioxide.

The yeast will become dormant after a week or two. Most breweries will extract this yeast for use in a consecutive batch, and yeast strains can even be used for years. The yeast will, however, develop slightly off-aromas after a while.

The kind of yeast used is also the main difference between ales and lagers.

Ale yeast strains, also called top-fermenting yeast, will generally rise to the surface in the course of fermentation to create a thick and rich head. They are ideally used between temperatures of 10 to 25 °C.

These high temperatures produce a beer rich in ester, which is evident in varieties like stouts, porters, and wheat beers.

With bottoming-fermenting yeast, the temperatures are maintained between 7 to 15 °C.

These lager yeast strains reproduce less rapidly than top-fermenting yeasts, and they will accumulate at the bottom of the fermenter. These strains are associated with beers like American malt liquors, Dortmunders, and Pilsners.

Beers can either have neutral yeast, which does not impact the beer’s flavor or yeast that adds aromas like banana and apple. 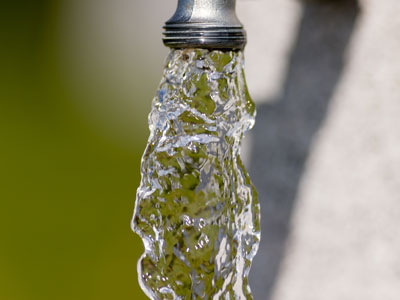 Beer is mostly 90% water, which is why brewers are concerned with the quality of water they use.

The soft water of Pilsen, for example, led to the development of Pilsner, while the highly alkaline water of Dublin is the focus of its stouts.

In Burton, England, the water used to make pale ales have gypsum, and some brewers will even add the mineral in a process christened Burtonisation.

In Germany, most breweries adhere to the Purity Laws, which dictate that only the highest quality raw materials should be used in the making of beer.

Some of the best beers are associated with regions that have some of the purest water on Earth.

Water quality and characteristics will influence the quality of beer produced. Breweries will commonly adjust the PH of water or add minerals to suit the water to the kind of beer they make.

To understand the role of water in brewing, it is vital to break it down to its mineral content.

Calcium mostly determines the hardness of water, and in beer, it boosts stability, flavor, and clarity. It has an acidifying effect on wort, and it can therefore lower the PH value of the beer.

Magnesium promotes the activities of the enzymes involved in fermentation. Like calcium, magnesium also influences the hardness of water.

Chloride will impact on the sweetness and fullness of beer, although chlorine has negative effects on the process.

The levels of carbonate and bicarbonate will inform the PH of the mash. Low levels will cause the mash to be acidic, while high levels will ruin the suitability of the mash. Sulfates lower the PH and bring out a hoppy characteristic.

The role of water is so critical that breweries spend months testing water quality before opening a new plant.

Beer comes in many styles and colors, and various regions in the world will have their own locally-produced beer with defining characteristics.

The brewing process relies on water, hops, barley, and yeast, which are combined in varying amounts and strains depending on the beer being made.

Yeast is the building block of the fermentation process, while barley is the grain that has been used to make beer for centuries.

Hops add flavor and aromas, and lastly, water influences the quality of the finished product.

Great Blog Fabian
But have you ever asked yourself why is there no list of ingredients on beer. Whay are the beer manufactures exempt from telling us the consumers what is in their beer.
Check it out… you will be shocked.
Cheers
Samuel