Most people hesitate to brew beer at home because they think it is complicated and needs expensive equipment. 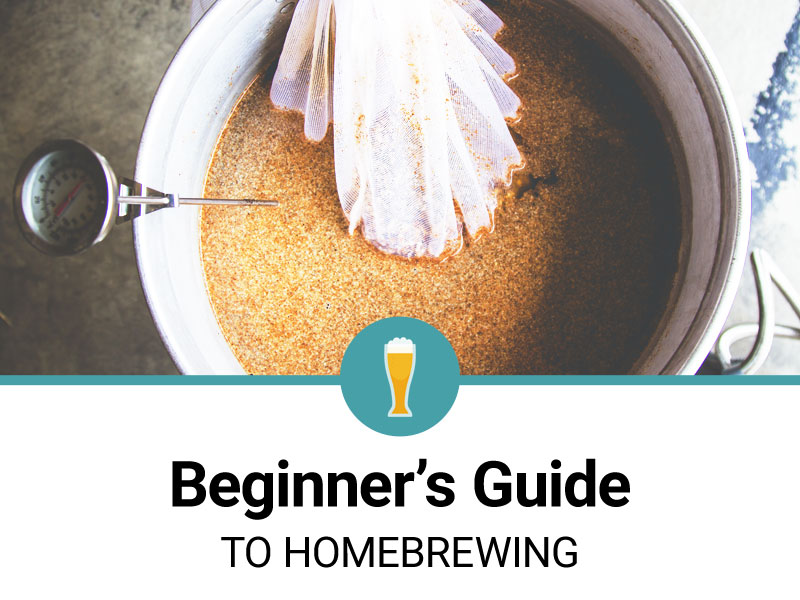 The art of brewing might be confusing for an inexperienced hobbyist, but like all the good things, it gets better with practice.

Brewing is a meticulous process which takes weeks to complete but it is also rewarding and therapeutic.

Homebrewing is especially popular currently with the agitation for homemade products instead of the mass-manufactured customer goods.

Here is a comprehensive beginner’s guide to homebrewing:

Back in the 16th century, the German Beer Purity Law (Reinheitsgebot) recognized water, hops, and barely as the only ingredients to be employed in the production of beer.

This declaration however omitted yeast, one of the most vital items in brewing.

Brewers at this time were not aware of the role of yeast in fermenting, and so they stored their beer until wild yeast triggered fermentation.

You will typically use a lot of water in brewing. If your tap water is fit to drink, then it will be fine for making beer. You can opt for bottled water if the water supply in your jurisdiction has high amounts of bicarbonates, sulfur, and iron.

As you progress in making homemade beer, you may alter the water by adding minerals or by sourcing spring water.

Barley provides most of the fermentable sugars used in brewing. It looks like wheat, and it is processed for brewing to produce malted brewing. A maltster is used to steep the barley at set temperatures and other precise conditions to encourage the grains to sprout.

The grains are subsequently dried to discourage further growth. Beer recipes vary, but you will generally be using 2 lbs of grains in most one-gallon recipes.

Most local brew shops stock the grains pre-milled, and if they are not milled, you can use a rolling pin to crush them. Malts can give your beer color, complexity, and flavor depending on your recipe.

Hops are another ingredient popular with the homebrewing community. They basically add aroma and bitterness to even out the sweetness of the malt.

Hops give off more bitterness and less aroma when boiled for too long. If it is the aroma you are after, boiling them for several minutes in about 200 ml of water will do the trick.

Let them cool for 10 minutes and pour the strained solution to your brew.

Yeast love a steady supply of sugar which makes them ideal for fermenting. Wild yeasts exist all around us, but they would not be particularly good for beer.

Homebrewers choose from a variety of cultivated yeast which give off unique flavors. Ale yeastsferment at temperatures near room temperature while lager yeast ferment in cold conditions.

Lager yeasts are a bit too challenging to pull off, especially for a beginner.

You can opt to purchase a complete starter kit or build one yourself. A starter kit will typically have the basic equipment for brewing. A store-bought kit will include instructions, recipes, and support.

The brewing kettle is among the must-have devices in your kit. As a beginner, an inexpensive kettle will do but it has to be durable to withstand several batches.

Most starter kits have the 5-gallon kettle which is enough for novices. You may upgrade as your batch sizes increase. Temperature is an important device when brewing, which is why thermometers are included in starter kits.

A regular meat thermometer will do the trick although you can select a digital one for more accurate and consistent readings.

To measure the alcohol content of your brew, a hydrometer will come in handy. Hydrometers basically calculate the gravity of your beer, and it is a must-have for a starter pack.

A fermentation bucket is where the magic happens, as the yeast and sugar interact to enable fermentation. Opt for a bucket that is food grade as not all buckets will do.

Glass carboys or PET can also be used. Fermentation gives off substantial amounts of CO2 which needs a channel to escape through.

This is where airlocks come in handy as they allow the CO2 out while keeping contaminants out of the fermentation vessel.

The airlock should hold sanitized water, and when it starts to bubble, it is an indication that fermentation is on course.

An auto-siphon is among the most affordable items on the kit at under $15. It enables the movement of your brew from vessel to vessel without much difficulty. After fermentation is done, you will need a bottling bucket to mix your priming sugar and your beer.

The bucket also helps you to fill your beer bottles with your brew without making a mess. A bottling bucket is more often than not included in most starter packs, but you can buy it separately.
Sanitization in home-brewing cannot be emphasized enough.

Contamination can lead to a failed batch, and you do not want to do all the brewing work only to end up with beer giving off an off-flavor. A no-rinse food grade like Star-San will do the trick.

You will also need bottles and bottle caps which must be thoroughly sanitized. 12-ounce bottles or the 22-ounce ones are enough to store your beer.

The basic starter equipment can be supplemented by extras like a wort chiller, strainer, and brew bag. As you become more seasoned in brewing, you will add or upgrade your devices.

The current brewing environment encourages experimental brewing, and it is tempting to jump straight into making impressive beer styles like the Russian imperial stout or Barleywine.

Complex beers offer the most opportunities for making mistakes, and a failed batch can discourage you from enjoying home-brewing. You can begin with some basic brewing styles and progress from there.

The American Pale Ale is not only appreciated in the US but Canada, New Zealand, and England as well. This beer is among the hop-forward styles where hops take center stage both in bittering and preservation.

Since hops are used in an aggressive fashion in making these beers, they may mask any mistakes in the course of brewing. It is not an excuse to brew bad beer, however, but it can be redeeming for beginners.

Hefeweizenis consumed all across Germany making it an unofficial national German drink. It is characteristically cloudy with a foamy and thick head. The beer is recognized for its rich banana flavor accompanied by spicy cloves.

American versions were quite popular with the advent of craft beer although this renown seems to have waned. It is easy to brew Hefeweizen using grains like German Pilsen 2-Row, Munich malt, and rice hulls.

The American Wheat Ale is the closest version to Hefeweizen brewed in the US. The grain bill typically has 50 to 70% of wheat to give the beer a fluffy characteristic.

The backbone of this beer is wheat malt. 1 or 2 specialty grains can be used like Munich, honey malt, cara-wheat, and dextrin malt.

When compared to the German version, this American beer utilizes more hops and the American ale yeast.

The American Amber Ale is recognizable for its dark caramel color. It is moderately-hopped, and no single characteristic dominates over the other.

The malts used to brew the beer are darker from roasting and when combined with light malt give the beer its amber color.

Amber ales are simple recipes which leaves less room to make a mess for beginners.

Now that you have chosen a recipe and you are armed with a beginner kit,it is time to make your brew.

The first and crucial step is sanitization as you want to have a beer with only the flavors you intended. Boil water in the amounts of 2 or 3 gallons and let it cool to 160 degrees.

Your pre-crushed grains should then be steeped in the water with a grain bag and left for 30 minutes. Boil the water after removing the bag.

Remove the brewing kettle from the heat and add the extract. The solution will be boiled again after which the bittering hops will be added. Let the mixture boil for about one hour and cool after that.

As a home-brewing beginner, you will make tons of mistakes. Some of them, as you will learn, are inevitable or unnecessary.

Homebrewers make a point about having high standards of sanitization and cleanliness. Dirty surfaces, equipment, and even hands are all potential contaminants.

Get solutions that are designed specifically for homebrewing and make a point of washing your vessels at every stage of brewing.

Another common mistake is neglecting temperature observation. Beginners often fail to evaluate temperatures during fermentation which can be altered by room temperatures.

Excessive temperatures increase the alcohol concentration and over-sweeten beer. Make use of a good thermometer not only to monitor fermentation but the wort as well.

Beginners sometimes skip on the instructions which can prove costly. While experimenting is encouraged, you should be well versed with the fundamentals of home brewing.

A small quantity and a simple recipe will not only be easy to execute, but it will also boost your confidence when you get it right.