Cost Of Brewing Beer At Home – Is It Worth It?

One of the coolest hobbies nowadays is homebrewing. People will think you are pretty cool if you can brew your beer. 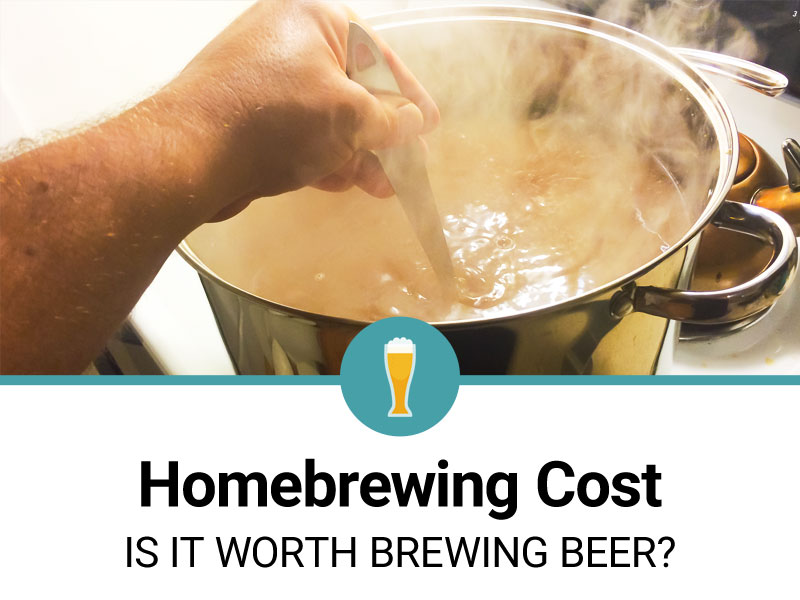 While this “cool factor” is enough to get most people into homebrewing, there are also several advantages to this hobby.

These include optimal quality beer, reduced hangovers, and the making of an amazing personalized gift.

The following are some of the health benefits of drinking homebrewed beer in moderation:

Even with all the above benefits, the leading reason for homebrewing remains saving some money. The real question for you is, however, what the actual cost of homebrewing is?

The following are tidbits to help you assess if homebrewing is worth its cost.

How Much Does It Cost To Brew Beer At Home?

Brewing denotes the procedure of turning malted beer (malt) and, at times, rye, wheat, and sorghum into beer. You make wort by combining these ingredients with tap or purified water then boiling the mixture in a brewer.

You will then add yeast to the boiled wort to begin fermentation. After 7-14 days, priming sugar is added to ferment the mixture further. The beer type you want to brew will determine how long the fermentation process should last.

The following is a cost guide for the equipment and ingredients you will use for this homebrewing process:

If you are going to homebrew, you will need a kit. Most of these kits include a five-gallon style or recipe kit with yeast, priming sugar, and malt. Other than the style kit and bottle caps.

You can reuse all the items in your homebrewing kit. There are several homebrewing kit brands online ranging from $100-$400. This might seem expensive, but it thankfully is a one-time cost.

This comprises single-celled fungi that ferment your beer. While there are thousands of fungi species, only brewer’s yeast is used for homebrewing.

In fact, some fungi species are harmful, have an unpleasant taste, and cause gastrointestinal issues when used in beer.

Brewer’s yeast is available in an inactive dry form in brewery supply stores. 10g of yeast goes for $5-10 and is enough to brew five gallons of beer.

You need the right bottles to keep your beer carbonated before its consumption. Empty beer bottles retail for $1-1.5 while their caps retail at about four cents each.

The bottles can be reused after their proper cleaning and sanitizing either in a dishwasher or by hand. This makes your bottles a one-off cost.

Sanitation is crucial throughout your homebrewing process. Before doing anything or handling your equipment, clean, and sanitize.

Moreover, when finished with the high-temperature wort boiling, be careful not to include any foreign elements into the beer, such as in water or ice.

Failing to maintain the highest sanitation levels leads to totally ruined or bad-tasting beer. Be sure that the cleaning solution you choose for your homebrewing equipment is safe for consumption rather than the cheapest.

This is a partially germinated high-protein barley variety that has undergone force-drying using hot air blasting. Malting will change the chemical structure of barley to make the sugars palatable to yeast for fermentation.

Malted barley will impart a rich and sweet flavor to your finished beer typically compared to caramel. It retails at $3-5 per pound.

You need approximately a pound of malted barley mixed with five gallons of ingredients to make four and a half beer gallons.

These are the dried flowers of hops. In brewing, they give your beer a citrusy flavor that will offset the malted barley’s rich sweetness.

Wheat and Belgian beers generally need fewer hops compared to India pale ales. Hops are sold at brewery stores for $3-5 for a packet weighing one ounce.

This can be made of wood or metal provided it is safe for use on stovetops. It costs $5-10.

This often comes with home brewing starter kits. Even so, if yours does not come with one, you can buy the kettle for $20-50.

The ideal brewing kettle is a stainless steel cauldron, though an aluminum stock pot will suffice so long as it can be used safely on a stovetop.

You can choose to brew your beer using tap water. Even so, if this water has a distinct taste, it might alter the taste of your beer.

Your best choice is to use distilled or filtered water for your brewing to avoid changing the beer’s taste. Though free in some localities, distilled water can cost up to $10.

You cannot underestimate the time you will invest in homebrewing. On average, it takes a month or two for you to finally get a homebrewed beer that is safe and worth consuming.

Is It Cheaper To Brew Beer At Home?

If you are comparing the cost of homebrewing to that of store-bought craft beer, homebrewing is the cost-efficient alternative. A 12-pack of craft beer costs between $14-19 inclusive of tax.

On the other hand, if you choose to homebrew, five gallons of beer equating to about 53 12-ounce craft beer bottles cost $80. This translates to about $9 for a 6-pack and $1.50 per bottle.

However, if you are comparing homebrewing to commercial beer, it is more expensive to brew your beer.

This is because the recipes for commercial beers are more expensive compared to those for craft beers. If, therefore, you are intent on the taste of commercial beer, it is cost-efficient to settle for a store-bought product.

Is It Legal To Brew Beer At Home?

While making moonshine will earn you a trip to jail in most states, beer brewing is legal in all states. The last states to make homebrewing legal were Alabama and Mississippi after years of lobbying.

Before you start the process, here are some things to remember regarding the legality of homebrewing:

What Is The Best Homebrew Kit?

While several manufacturers now have homebrewing kits, the cheapest one or most readily available might not be the best one for your venture.

The kits are ingredients and tools necessary for your homebrewing. One of the primary tools is the fermenter that comprises the airlock, spigot, and stopper.

Some kits also include a thermometer, hydrometer, steeping grain, cleaning sanitizer, brush, transfer tubing, a bottle capper, and a bottling wand with a cut-out valve.

One of the best starter brewing kits is the Premium Craft Brewery in a Box.

As one of the premium brands on the market, you are sure that this product from Northern Brewer is the best. Here are some tidbits on what the product entails:

The brewer measures 28x27x27 inches and weighs 45 pounds. It can make up to five gallons of beer. The Northern Brewer Premium Craft Brewery in a Box supports the fresh squished, and brown ale beer varieties.  It also has the following:

It is immensely rewarding when you make a gourmet meal from scratch. This is irrespective of whether or not you are a top chef or your food boasts the same flavors as a high-end restaurant.

The same principle applies to the brewing of your beer from scratch. If you are disappointed that your homebrewed beer does not boast the same flavors as store-bought beers, do not let this get you down.

Practice will perfect your homebrewing process. With time, you can master the ingredients of the whole process and the best tactics to get a great-tasting beer. Go on and start homebrewing today.