Shopping for a brewing starter kit can be overwhelming with the many options available. 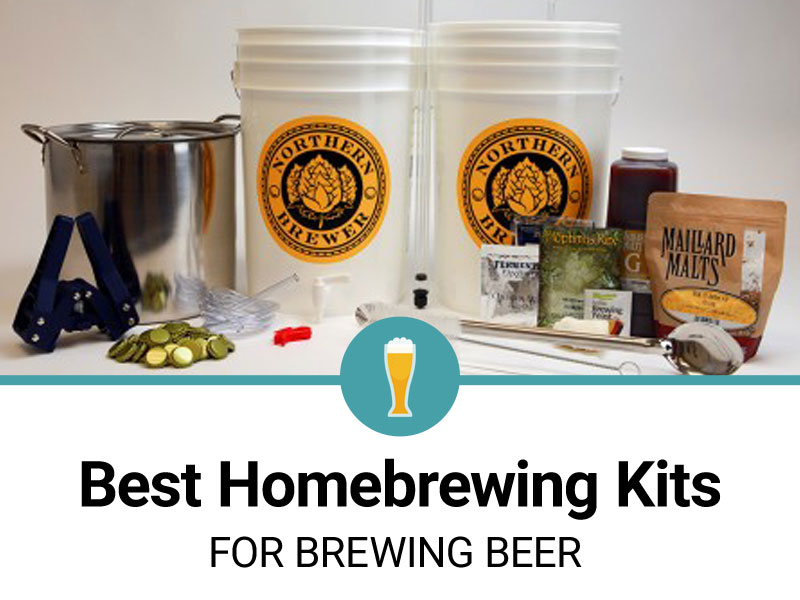 A comprehensive beginner kit is a good place to start as getting the right devices is crucial to the success of home brewing.

Most starter kits have equipment that can be repurposed or reused such that you will continue to use them as you progress in the hobby.

Here are the five best home brewing kits to get you started:

This kit is available on Amazon, and it has been on the market for 20 years. This history means that it has been through numerous upgrades to make it one of the best starter kits.

It is packed with essential instructions including a print manual with visuals, online videos, and digital manuals.

Northern Brewer has been in the brewing business since 1993, and it is more foolproof to opt for a company that has been established for multiple years.

The curated ingredients have been hand-picked by brew-masters, and they will support a batch size of 5 gallons. This kit is perfect for making beer that tastes like it was brewed professionally. The recipe is Chinook IPA with a yield of 50 twelve-ounce bottles.

This kit is inclusive and fool-proof, and it will ensure that your first brew is a success.

This kit comes loaded with all the requirements to make five gallons of the popular Block Party Amber Ale.

This recipe produces a rosy beer with a herbal flavor in addition to the hops. What makes this kit an excellent choice for beginners is you get all the vessels you need like the 5-gallon stainless steel brewing kettle.

Beginners in the craft-business rely heavily on instructions as brewing can get messy and confusing. The easy-to-use instructions that accompany the kit make the process less overwhelming.

These ingredients are adequate for making a batch size of 5 gallons. Also included in the kit is a 6.5-gallon fermenting vessel with a lid and a bubbler airlock, bottling bucket & bottle filler, sanitizer, 5 ft siphon tubing, and bottle brush.

On Amazon, the kit has a rating of 4.5 over five stars. One verified customer attested said, “I highly recommend to buy this kit for starters.”

The Mr. Beer Premium Gold Edition is designed to simplify the brewing process. It is a product of the Australian-based Cooper’s brewery which boasts over 150 years of brewing expertise.

Some of the kit’s equipment are patented including a 2-gallon fermenter called the Little Brown Keg. It features a broad mouth which makes it easy to drain your wort and also to clean the vessel.

It also features an in-built airlock. Even more exciting is a locking spigot that makes it easy to bottle your brew.

There is a collector under the spigot which collects all of your brew’s sediments so that you only bottle a clean product. Mr. Beer fermenter reduces the amounts of devices you will need for brewing.

The kit also includes hopped malt extracts which can be used by a brewer of any level.

The kit, available on Amazon, is perfect for beginners who want to shorten the brewing process and reduce the risk of contamination.

This kit is designed to produce a successful 5-gallon batch. It is a product of Monster Home Brewing Supplies which is an American online shop dedicated to delivering quality brewing equipment.

The kit is perfect for the two-step fermentation process with a 7.8-gallon fermentation vessel and a 6.5-gallon glass carboy. This package is an upgrade from the k3 kit which has two 6.5-gallon containers.

The carboy in the k6 is perfect for secondary fermentation, but you can also use it for primary fermentation for 5-gallon batch size. The large containers can also support 6 gallons of a brew.

The guide and instructions will go along way in helping you begin your brewing journey. The kit enjoys a 3.7 rating out of 5 stars on Amazon.

This kit includes a Pale Ale recipe in enough quantities to make a 5-gallon batch size.

The equipment in the kit is enough to use for a beginner especially if they follow the instructions that come with the purchase.

This kit has a 6.5-gallon fermenting vessel which is adequate for a brew of 5 gallons. A larger fermenting bucket is always the recommended choice by home brewers.

A grommeted lid and the airlock that comes with the bucket will prevent contamination of your brew. There is also an oxygen wash sanitizer/cleaner which will make the cleaning process easy and effective.

You will need to buy a brewing kettle, bottles, and bottle caps separately. This product has a rating of 4 out of 5 on Amazon.

Is it cheaper to brew beer at home?

Homebrewers are a frugal community and are constantly looking for ways to cut costs and improve beer quality. There are numerous ingenious ideas shared among homebrewer groups.

Homebrewing is fairly inexpensive to produce when compared to most beers in the market. The initial cost of purchasing the necessary equipment can be costly depending on the devices.

The process, however, reduces dramatically in cost. The price of a 6-pack micro-brew averages at $10. A five-gallon recipe, on the other hand, ranges between $25 to $30.

If you fill 50 bottles, the cost will come down to 60 cents a bottle which is substantially cheaper than buying beer.

Most homebrewers prefer all-grain brewing since it is cheaper because grains are more affordable than malt extract. To get into all-grain production, you will need extra equipment which will be offset by the low production costs.

An all-grain brewer produces more prominent nuances of beer. An average pale ale, for example, will have its extract kit priced at $25. If you choose to buy the ingredients on wholesale, however, the cost will be about $15,000 for two cases of beer.

Homebrewing, in this case, ranks cheaper than buying micro-brewed beer or importing. You can start with a simple and inexpensive kit and look out for low-priced hops, yeast, grains, and malt extracts.

How much time does home brewed beer last?

Beers age differently depending on the recipes you used. Beers with high quantities of hops will generally lose their hoppy aromas over time. It is best practice to consume these beers fresh and not store them for too long.

Beers with a high ABV and a malty brew need a little aging before offering their very best in taste. Giving these beers time will allow the malty flavors to achieve more complexity.

Homebrewers are keen on sanitation, and this emphasis is for a good reason. The shelf-life of your beer will depend on your sanitation practices which will eliminate any microbes that generate lactic acid.

If your brew is bottled without top-level filtering, a small quantity of yeast will settle in the bottles. Large populations of yeast will however die and began decomposing in the brew and add unwanted flavors in your beer.

Well brewed and stored beer can hold up for over a year. You should avoid sunlight and high temperatures when storing your brew. The cooler, the better.

Sunlight and fluorescent light will trigger chemical reactions between the sulfur and the hop compounds resulting in a skunky character. Brown bottles are the best option for storing beer.

Beer should also be stored upright to let the yeast settle at the bottom of the bottle. A horizontal position might cause the creation of a yeast ring.

How much time does it take to brew beer at home?

The homebrewing process includes hands-on and hands-off periods. The brewing day takes at most 6 hours which includes cleaning and sanitation. A lot of the time goes to waiting for the wort and water to boil and for the mash to convert.

Primary fermentation depends on the beer you are making (ales or lagers) as well as the recipe, and it can take as little as three days to a week. The beauty of brewing is that you do little work as the most action is credited to the yeast during fermentation.

Once the yeast settles down, you can transfer your brew to another vessel for secondary fermentation. This process can take two weeks as the sediments settle down leaving a clear beer for bottling.
The next process involves the transfer of beer to bottles which are subsequently capped. You can wait for two weeks as the beer carbonates. Opening beer early can lead to a flat drink, and it may also deliver a less-tasty brew.

Most homebrew can last for a year and even longer. These steps can take a minimum of 5 weeks. As a beginner, you may rush through the process, but it will be worth your time if you cultivate patience during the process.

Is it easy to brew beer at home?

Homebrewing can be incredibly easy to start as all you need to get is an all-in-one kit. Kits are stocked by local chains and online retailers for around $40. These kit forms come with different beer styles which range in complexity.

Some are even tailored for beginners, and you will upgrade as you become seasoned. The actual process requires a lot of boiling, stirring, and sanitation. The bulk of the process is fermentation which only needs observation.

How long does beer yeast last?

Liquid yeast is typically stored in the refrigerator until brewing time. Dry yeast is freeze-dried and it can be stored in normal conditions and can last for two years. Most commercial yeast tends to last for six months.

With yeast that has passed its expiration date, you can make a starter several days before brewing day. The yeast will probably come back to life with the starter. Fresh yeast is however more suitable for making beer.

Can you reuse beer brewing kits?

Brewing kits can generally be used again as long as you take meticulous cleaning and sterilization measures. Most kits are designed to accommodate reusability, and they are few things that you will need to re-purchase.

The ingredients are probably the items you will keep on buying as they have expiration dates. You can reuse yeast to save money for up to 6 times. Harvesting yeast from either the primary or the secondary fermentation vessel requires care, however, so that it does not get contaminated.

Other equipment like the brewing kettle, siphon and tubing, and airlocks can be upgraded over time as you gain brewing expertise.

Brewin beer on your own is fun and rewarding, and you get to experiment with various styles, ingredients, and recipes. A basic starter kit will set you off on the brewing path, and you will save money by buying ingredients in wholesale.

Homebrewing communities exist in various parts of the world as well as online, and you will get to interact with novices and experts. A starter kit is extremely crucial, and you need to get it right to be brew a successful batch. Keep track of the instructions and the guides in the course of brewing.