10 Beer Styles You Should Try Out

Beer is among the most popular drinks worldwide. Though primarily associated with socializing, this beverage has several health benefits. 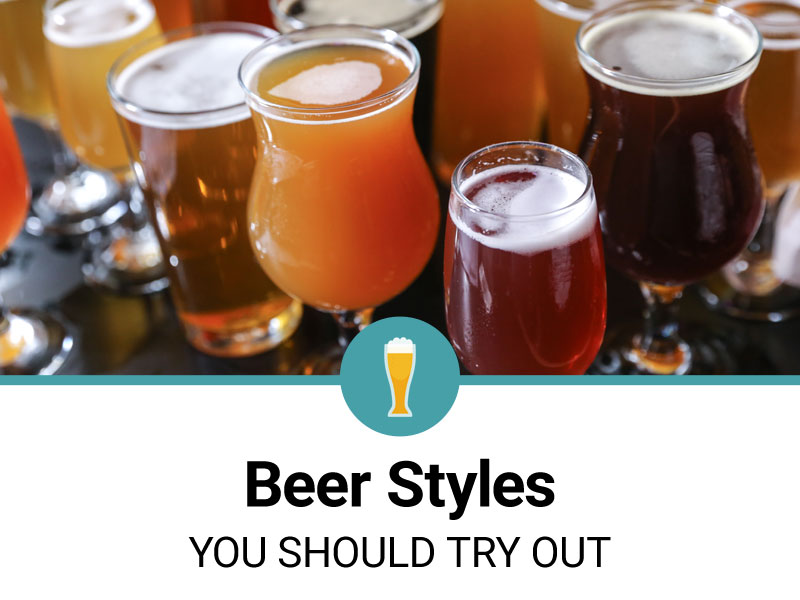 Moderate beer consumption is also linked to a reduced risk of type 2 diabetes and stress.

However, there are many beer styles on the market. Picking one might prove challenging even for a long-time drinker without information about what differentiates them.

Beer is classified according to its brewing, including the process used, its ingredients, fermentation and, at times, its origin.

The following is a guide on the ten beer styles that are worth trying out.

Ales and lagers are the two major beer styles. Ales date back to antiquity. They are created through a process named top fermentation.

In it, yeast will be fermented at warm temperatures and then settle at the top of the beer.

In general, ales will have a fuller body, richer malt content and more fruity esters compared to lagers. The following are the types of ales you should sample:

The color of IPA is brownish orange. Indian pale ale undergoes the same brewing process as pale ale, but its amount of hops is higher than in the latter.

This gives IPA a citrusy and bitter taste. The hops also lend IPA floral and piney flavors. IPAs have higher alcohol content compared to other ales. The standard IPAs include American IPA and English IPA.

Some manufacturers now have specialty IPAs. Imperial or double IPA is the most popular specialty IPA. It features a high alcohol content, with a lot of hop and malt.

Though this style originated in England, it has now become an integral part of the North American beer scene. Even so, North American pale ales have less malty flavors than their English counterparts.

Pale ales comprise pale malts that give them light and subtle blonde hues. Owing to their delicate flavor, brewers will add bittering hops to give ales a robust taste or sweetening hops for floral and sweet flavors.

This has a dark brown and, at times, black color. Brown ale is opaque and thick. It has a malty undertone with a typical caramel, toasty flavor. The brewing of brown ale starts with the scorching of barley or malt before its brewing and fermentation.

This process gives the ale a deep rich flavor. Brown ale is also somewhat bitter with hints of chocolate and coffee. Examples of this beer include American and English brown ales.

Lagers were introduced into the beer market about 200 years ago in Bavaria. This beer style borrows its name from the German word “lagern” that means “to store”.

Its brewing starts with the fermentation of bottom-fermenting yeast at 7-12 degrees Celsius. This is followed by the lagering phase, where the beer is stored at 0-4 degrees Celsius.

Lagers are generally the entry point for new drinkers with their smooth taste and little to no fruitiness. There are two lager types:

These taste a little malty, are pale yellow and have a subtle grain scent. They are consistent, clean, refreshing and match all dishes since they do not have a considerable inherent flavor.

The most popular pale lager is American lager. This pairs well with spicy food and American cuisine.

Dark lagers are so-called because of their deep-brown mahogany color. They are smooth and melty with caramel flavors. These lagers have low bitterness profiles and mid-range alcohol content.

The typical dark lagers on the market include amber American, Oktoberfest, Vienna lager and German schwarzbier.

Amber American lager is best served with American cuisine, cheddar, beef and poultry. Oktoberfest is a full-bodied drink that is so-named after a celebration in Munich by the same name.

It pairs well with vegetables, meats, spicy cheese and German dishes. German schwarzbiers are less malty than other dark lagers but have a slight sweetness.

They are best served with Muenster cheese, spicy dishes and German cuisine. Vienna lager is reddish with a crisp drinkability and subtle hop taste.

You can enjoy it with German dishes, spicy cheese, pork and Mexican cuisine.

Pilsner originates from the Czech Republic. It is often categorized as a lager. The beer is relatively clear and pale gold. Moreover, it is more flavorful and spicier compared to American lager.

Pilsner is refreshing and crisp with an intricate maltiness and bitterness. This is because of the noble Czech hops known as Saaz hops used in it.

There is also a German pilsner variety that is drier, lighter, and crispier than the Czech pilsner. Pilsner can be paired with shortbread, fish and chicken.

This uses wheat as a substitute for the malt in other beers. Wheat beer is lighter in alcohol content and colour compared to other beers. Its tangy flavor pairs well with fruits.

As such, most brewers add seasonal fruits to their products. The types of wheat beer available include American pale wheat, Belgian witbier, Berliner Weisse, dunkelweizen and hefeweizen.

Stouts are the darkest beers. There are several types of stouts. These include:

Their uniting element is the inclusion of a deeply roasted malt that makes a jet black to dark brown beer color. Stout is best paired with roasts, stews and desserts.

The line between a stout and porter has become increasingly blurred. Most people now use these terms interchangeably.

Though both stouts and porters are dark, the latter is less coffee-like than the former.

Moreover, porters have a mild hop taste complimented by notes of burnt caramel, unsweetened chocolate and, at times, forest fruit.

They are the best accompaniments for pork roast, chocolate and sweet cheese. The following are the types of porters you should try:

This beer is originally from the German area of Dusseldorf. It is clear brown to copper-colored. The beer has a mild alcohol content at 4.6-5.6%.

Its hop flavor is medium to low while the hop bitterness is high to medium. Altbier is best paired with apple pie and grilled salmon.

This is a pale ale brewed around Cologne, Germany. It is a top-fermented beer that contains pilsner malt, noble hops and ale yeast.

The ale yeast gives Kölsch a fruity and bread-like flavor and aroma that differentiates it from lagers containing ale yeast.

Though sometimes confused for a pilsner, Kölsch is soft and creamy while the former has a dry profile. Its alcohol content is 4.5-5.5%.

This is also a German beer from the upper Franconia region of Kulmbach. It has a dark brown to vibrant reddish copper color and alcohol content of 9-14%.

Eisbock has no hoppiness but rather a strong dark fruit ester balanced with a deep maltiness.

The term “rye beer” encompasses all beer varieties in which rye replaces some portion of barley. These beers are specialty beers that feature unique fermentable ingredients like wheat, corn or rice.

Rye beer has a malty, roasted flavor with low hop bitterness. The beer can be brewed as a lager or an ale with a spicy or sweet taste.

Rye beer is reddish-brown to light copper-colored and has an alcohol content of 4.5-6%. It pairs well with creamy cheese and spicy meat.

The beer culture is a rewarding and fascinating adventure through chemistry and history with a cold drink waiting at the end.

When it is enjoyed responsibly, beer can become an integral part of all human stories.

The above are only part of the beer styles available on the market. There are over one hundred styles, with variations under them to suit every drinker’s taste.

These tidbits have hopefully given you a rough idea of what beer will best suit your taste. Though the exact taste might differ between brands, this difference is only slight.

Alternatively, with the right ingredients and the best homebrewer, you can make the above beer styles. However, before deciding on homebrewing, be conversant with your state laws on the same to keep out of trouble.