How to Use a Hydrometer to Measure Alcohol in Beer?

A hydrometer is designed to measure density, and it can be used to determine the alcohol content in beer. When it is placed in a liquid, it will sink to a particular depth, which depends on the liquid’s density. 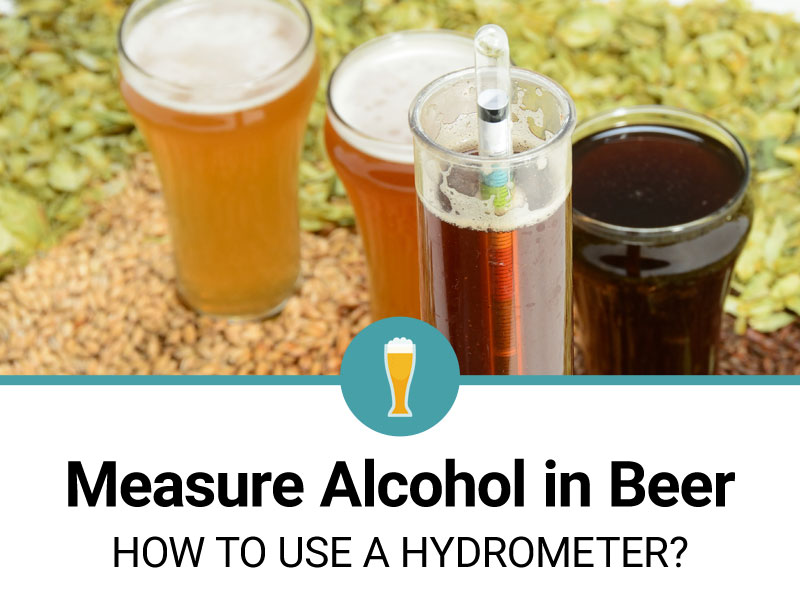 A hydrometer identifies the specific gravity of a liquid, which is the ratio of its density to that of water.

A liquid with an SG of over 1 is denser and will typically sink while that with an SG of below 1 will float because it is less dense.

When a hydrometer is used during brewing, it measures the amounts of dissolved sugar in the recipe.

It will indicate how effective the fermentation process is, by determining how well the yeast is fermenting sugars by volume.

How to Use a Hydrometer? 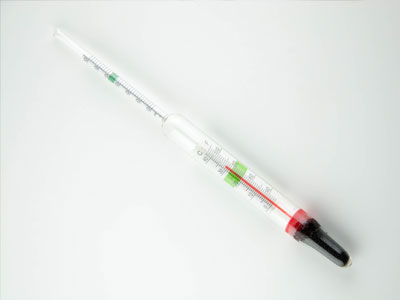 How to Use a Hydrometer?

Using a hydrometer is quite easy using the following steps:

Sanitization is important when it comes to getting accurate hydrometer values. You can use a no-rinse sanitizer to avoid infecting the device again when cleaning.

Determine the Temperature of the Hydrometer

Hydrometers are designed to function at a particular temperature, which is mostly 60ºF or 20ºC. You can use this reference temperature when taking readings.

Fill the Trial Jar with the Wort

Most hydrometers are coupled with a trial jar for testing the liquid in question. This step is done after the wort has been cooled, and the yeast is yet to be added. Retrieve a sample of the brew and drain it into the trial jar. The jar should contain sufficient volume to suspend the hydrometer.

Drop the hydrometer and let it buoy. You should wait for the air in the wort to escape, and the hydrometer is vertically positioned to get the most accurate reading.

A hydrometer is calibrated with particular gravity points. The gravity reading of the wort will be where the liquid rises to. Identify the number on the hydrometer that is being intersected by the liquid-air line.

Most OG readings of wort fall between 1.035 to 1.060, although the ingredient kit will typically include an OG to give a reference point.

It is better to read the reading from the bottom of the meniscus from the eye-level. This is the curved surface created by surface tension, and it can substantially influence your records if you are not consistent.

Calibrate as Per the Temperature

You will have to calibrate your OG reading for temperature. These ratings are stated assuming a temperature of 60ºF (16ºC), and it is vital to be aware of the wort’s temperature to get a correct reading. You can go ahead and recalibrate if your reading is different.

Hydrometers will typically be packaged with a chart to make this process easier. You can simply add the “△ Gravity” to the original reading to get the right specific gravity. If your wort’s temperature is 75, for example, locate this reading on the chart and add it next to the OG you got.

The second hydrometer reading will be taken once fermentation is over or near its end. By this time, the wort has become beer, complete with alcoholic content. The ingredient kit will typically have a final reference gravity, which mainly falls between 1.005 to 1,015.

You can also take another reading in the course of fermentation to ensure that the process is unfolding smoothly. 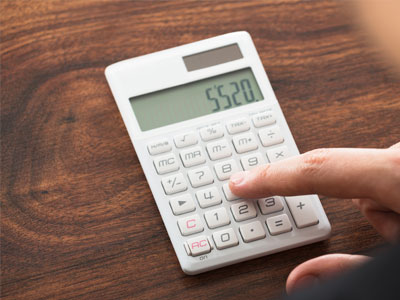 The alcohol by volume tells brewers how much alcohol is in their brews. There are multiple ABV calculators online that make this calculation easy. The most used equation is:

You can also use the hydrometer to take the potential alcohol readings. Beers will mostly have an ABV of 2 to 6%, which is low compared to other liquors like whiskey, which range between 40 t0 50%.

For homebrewers, you can adjust your alcohol content with your mash. Add fermentable sugars and base malts, and adjust the grind of the grain you use. You can also adjust the mash temperature to dictate the concentration of alcohol in your brew.

How to Get Accurate Readings on a Hydrometer? 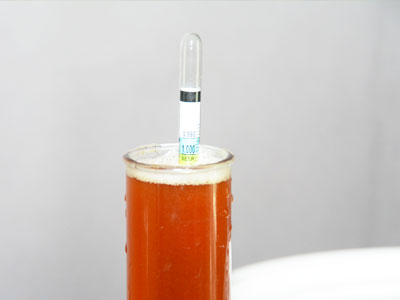 How to Get Accurate Readings on a Hydrometer?

Good technique is necessary when using a hydrometer, and accurate readings will depend on:

Both the hydrometer and the brew should have the same temperature as the surrounding environment to avoid adjustments in density during testing.

Stir the brew before reading the temperature to ensure uniformity of both temperature and density.

Stirring the liquid completely distributes the layers of varying densities, and it helps in achieving temperature uniformity.

Most hydrometers are calibrated to 60ºF (16ºC), and you should let the sample cool to this temperature before noting the reading

The hydrometer should also stay in the brew for a few minutes before the ratings are taken.

Deviations from the standard temperature can be made up for with a correction scale or with the temperature correction charts made available by popular by brewing literature.

Ensure there are no Bubbles

Avoid interpreting the scale when there are bubbles on the side of the hydrometer. Such gases will offer more buoyancy to the device and give inaccurate ratings. Turn the hydrometer until all the foam has escaped.

The centrifugal actions serve to disperse the gases for some minutes so that you can get accurate readings. You can then slowly insert the hydrometer into the brew until it floats naturally. Allow it to float by itself and proceed to note the readings.

The hydrometer is most effective when it is clean and sanitized. The stem is particularly sensitive, as this is where you will determine the reading. Before use, the device should be cleaned, rinsed, and dried using a clean and lint-free cloth.

You can use ethyl alcohol on the hydrometer and soda ash or caustic soda for the testing jars. Throw away the sample after getting your readings.

Be Consistent with Readings

Hydrometers will generally come with guides and instructions, so take the time to read them. Readings are typically observed at the top of the meniscus of the beer, which is the crescent-shaped curve of the brew rising up the hydrometer’s stem.

The curve will appear convex if you are using a dry hydrometer. Consistency is vital when using a hydrometer, and even if you take your readings at the crest of the curve, they will still be consistent.

The readings will, however, be different from a brewer who reads their ratings from the meniscus.

Choosing a Hydrometer for Beer 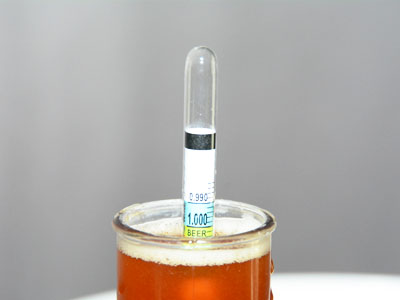 Choosing a Hydrometer for Beer

Hydrometer comes in various styles depending on the liquid being measured.

The most common of these types is the triple scale hydrometer. You can get it at $5-15, making it quite affordable. It will measure specific gravity, potential alcohol, and the Brix/Balling scale.

The specific gravity has a wide range of 0.00 to 1.170, so it will be suited for many batches. You can, however, get off-readings because it can measure a wider range of numbers.

The thermohydrometer makes work easier by measuring both temperature and specific gravity. The thermometer calibrations are not standard with this device, so you can get inaccurate ratings if you use a different one for another batch.

The numbers on a precision thermometer are spaced on a smaller scale to enable more accurate readings. It measures specific gravity with different ranges like 1.000-1.070 and 1.060 to 1.130. You may need several of them for different batches, and they cost around $30.

When it comes to hydrometers, keep in mind that glass is easily broken, especially when it is constantly handled. Most of the hydrometers used for beers are packaged with a trial jar, which also serves as a case.

Get a jar that has a wide base as well as a cuff around the top to prevent the container from tipping all the way sideways. Hydrometers are best stored in sturdy cases to encourage durability. You can buy two of them to ensure you have a backup during brewing.

If you want to test your hydrometer, you can use distilled water to ascertain that it is giving accurate readings.

Test jars are as important as the kind of hydrometer you get. Homebrewers will typically brew 5 to 10 gallons of beer, and they can get jars that hold little wort or beer to reduce waste.

Do You Really Need a Hydrometer?

A hydrometer is a good tool to have during the brewing process. It tells the brewer just how much sugar is in suspension at different stages of brewing. A high reading will be recorded when the wort is full of sugars, while a lower reading indicates that beer has been formed.

The device will also inform the brewer that fermentation has been finalized successfully. Once you observe the same reading over a few days, you will be certain that the yeast has fully reproduced, and no more sugar can be converted.

A hydrometer resembles a large thermometer, and it is commonly used to determine the alcohol content during brewing.

It is first used on the wort, and then on the beer, and the ratings are then used to calculate the alcohol concentration.

Hydrometers come in three types, depending on the level of efficiency you want.