Like with all products nowadays, packaging plays a crucial part in a manufacturer’s profits. 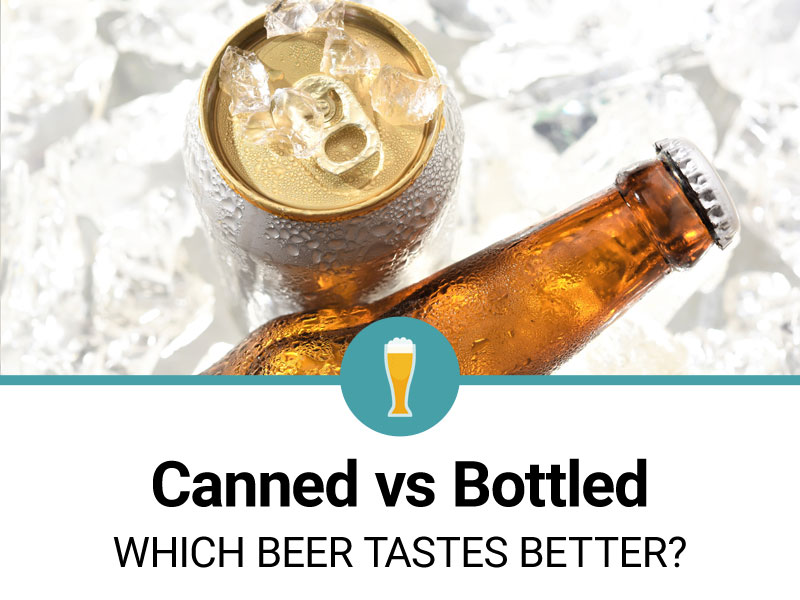 Consumers are now intent on picking products with packages that look exceptional, enhance the product’s taste and functionality, or can be re-used.

Beer drinkers are debating whether the drink tastes better when packaged in a can or bottle.

This debate has recently gained momentum as more companies are packaging their beer and even wine in cans.

Research has shown that there will be no difference in the taste of canned and bottled beers if both are kept under the same conditions.

The people interviewed in favor of canned beer argue that since the can is airtight and lets in no light, the beer is untainted and tastes better.

On the other hand, drinkers in favor of bottled beer say that bottles keep the drink cold for longer.

Below are expert guidelines to answer some of your questions on the better-tasting option between canned and bottled beer.

Do Aluminum Cans Impact The Flavor Of Beer?

No, aluminum cans will not affect the taste of beer. One blind taste test proved this. Researchers in this test had 151 participants taste the same beer brand in bottles and cans.

61% of the subjects preferred bottled beer to the canned variety when they saw the container, but when blinded, they did not report a taste difference.

You, at times, might feel like canned beer has a slightly metallic taste. This is, however, not the can’s fault. All cans have a special lining to protect the beer.

The coating was initially BPA, but most manufacturers are now going for BPA-non-intent liners, which is safer than the latter. The can lining does not affect the drink’s taste.

The metallic taste is often caused by issues in the brewing process like ingredient storage and water chemistry rather than beer packaging.

Why Are Bottled Beers Still On the Market?

Glass bottles remain ever-present elements in the beer experience. Early beer bottles were dark and thick but broke easily because of the carbon dioxide produced during secondary fermentation.

Innovations in glass strengthening have thankfully prevented this in modern bottles. Bottle materials have also evolved, and there are now some made of wood pulp, ceramic, and even cobalt.

Most people still prefer bottled to canned beer, and manufacturers continue producing them to retain their market share. Moreover, the bottles can be shaped in different ways for customization and easy holding.

Among the main reasons that beer bottles are here to stay is their eco-friendliness. The glass recycling frequency across the world is steadily increasing, with more people taking conscious eco-conservation measures.

Recycling lowers the production costs of the bottles and the environmental footprint of the same.

Furthermore, glass recycling is energy-efficient for manufacturers since it takes less heat to melt used glass than the raw materials for making new glass.

If you have checked out beer aisles lately, you might have noticed an increase in canned beer even with the benefits of bottled beer. The following are some of the advantages of aluminum canned beer:

– Beer in cans does not get exposed to UV light

One of the well-known defects in the beer sector is a skunky product. The alternate name for this beer “light-struck beer” might hint at its cause.

The phenomenon follows the exposure of the light-sensitive hops in beer to UV light. Hops are the flavor additives and preservatives added to beer during manufacturing.

When exposed to UV rays, the alpha acid in the hops is denatured, causing your beer to have a skunky taste. In the past, brewers protected their beer from UV rays by storing it in brown bottles.

The bottles, however, allowed some amount of UV ray infiltration. Aluminum cans are among your best choices for ensuring UV rays do not get to your beer, and its flavor is preserved.

– Canned beer is lighter and easier to transport than bottled beer

There is a reason why people opt for cans when they need to pack a cooler for a day out in the park or a party. This is because the cans are easier to transport, and you need not worry about how to package the fragile empty bottles afterward.

Moreover, canned beer is lighter than bottled beer. A six-pack of bottled beer, for instance, weighs at least seven pounds on average while a canned six-pack weighs two pounds at most.

There are several reasons why beer cans are a better option for the environment compared to bottles. They are light and thus easy to ship. This means that manufacturers and retailers do not have to use a lot of fuel to transport them.

This translates to less emissions that damage the ozone layer. Secondly, most communities have more robust deposit and recycling measures for aluminum products than they do for glass.

– Cans are easy to open

Beer cans are undoubtedly easier to open compared to bottles. You need not reach for a bottle opener or damage your teeth as you will when opening a bottle.

Regarding the appealing cracking sound when opening a beer, both the can and bottle have equally appealing sounds.

From the above tidbits, you appreciate that there is no difference in the taste of beer attributed to its packaging. The preference appears to be primarily linked to some psychological aspects that inform client preferences.

In the past, for example, bottled beers were more expensive compared to canned ones since advertisers set out to convince clients that they were of better quality.

However, this is just a marketing gimmick since the same product packaged in bottles is poured into cans.

Therefore, you can pick the convenient option for you between the two without apprehension that your beer will taste different.

Thanks for info it will help with my bottle loving buds.