Lager vs Ale – What is the Difference?

Beer drinkers can typically tell the difference between ales and lager by taste, smell, and look. Ales taste more bitter and fruiter while lagers are smooth and are commonly described as “crisp”. 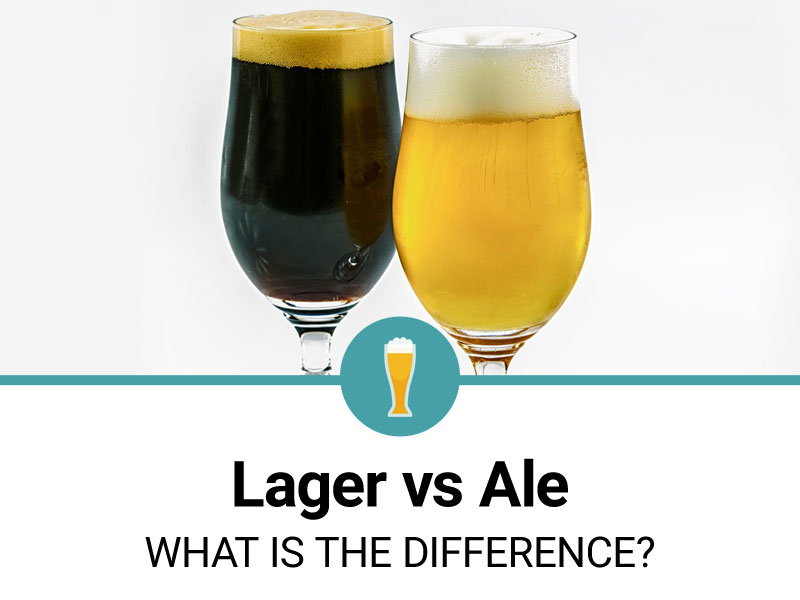 Brewers, however, know that the difference lies in fermentation. Lagers are the more recent of the two, having developed in the Bavarian breweries of the 15th and 16th century.

Brewers during this period noticed that their brews continued to ferment in the cold-ice caves during winter.

They would initiate the brewing process in late fall and harvest ice from rivers and lakes to cover the brew.

The beers would be retrieved in early spring after a prolonged storage period.

The Bavarian beer was noticeably different from the English ale in that it was smoother and mellower. This distinction interested scientists who began studying its different yeast.

Lagers continued to gain prominence with the most famous at this time being “pilsner”.

The beer was named in honor of the Czech (then Bohemia) city of Pilzn. Traveling monks had introduced the lager yeast in Bohemia from Bavaria.

With the development of quality glassware, the brewing of lager improved to produce a pale and smoother beer.

Lagerssoon grew in popularity in places except for Great Britain and Belgium which stuck with their ales.

Ales have their roots in Medieval England when the alcohol in brews and the warm temperature conditions used in brewing warded off numerous pathogens that were causing many human deaths.

Some of today’s most popular lagers are Heineken, Kingfisher, Tsing Tao, and Budweiser. Ales and lagers also have numerous sub-types brewed in different localities in the world. Some of the fundamental differences between Larger and Ales are:

Most beer enthusiasts will tell you that larger utilizes a bottom-fermenting yeast while ale uses a top-fermenting one. The answer is however more comprehensive than that.

Ale is fermented with a kind of yeast called Saccharomyces cerevisiae which is commonly used to make bread and wine. This variety handles a range of environments like higher alcohol content and different temperatures.

This yeast is the original of civilizations, and it has been discovered all over the world in places like Antarctica.

The yeast will characteristically rise to the surface of a brew and then sink as fermentation comes to an end. It can, therefore, be easily harvested from the top without interrupting the fermentation process.

In historical societies, bread was made in proximity to brewing, and the yeast was commonly skimmed off the brew to leaven the bread. This yeast also encourages fast fermentation and ale can be brewed in as little time as one week.

The yeast used in the fermentation of Lager is called Saccharomyces uvarum.

It was first applied to beer brewing in Bavaria in the Renaissance and was among the species that were introduced to Europe from the Americas. The yeast does rise to the top as is the fashion of the ale yeast.

Early fermentation vessels were built with materials that rendered it hard to see the bottom part of the vessel, and because the yeast was not visible at the top, it was assumed to be a bottom-fermenting yeast.

The lager yeast needs more specific conditions to thrive when compared to the ale yeast. It also breaks down sugars more slowly, and the lager brewing process is therefore slower.

The lager yeast further has a low tolerance to alcohol and can ferment mebilose, a kind of sugar not fermented by ale yeast.

Another key area of distinction between lagers and ales is the fermentation temperatures. Most yeast varieties will die at temperatures above 104 °F.

Ales tend to be produced at higher temperatures, typically between 60-80ºF. Some varieties can even withstand temperatures in the ranges of 95-100 °F.

Some brews are exposed to these high temperatures to trigger more aggressive chemical reactions and subsequently faster fermentation.

This tactic is not always recommended however as it can produce a cloudier and hardier beer that some drinkers may find distasteful.

Lager thrives in cold temperatures. It developed in Bavaria and in 1553, Duke Albrecht V decreed that no brewing was to be undertaken in the summer.

Lager was therefore heavily brewed during the winter season in many parts of Europe where it gained favor among brewers.

The fermenting temperature for lagers ranges between 45-55ºF. The low temperatures support slower fermentation and produce a clearer beer.

Yeast is the main determining factor in the amount of alcohol present in beer varieties. Ale yeast thrives in high alcohol concentrations, and ales generally have a higher alcohol content.

Lager yeasts, on the other hand, are more fragile and will die off if the alcohol content rises above a certain limit. Lagers exhibit lower levels of alcohol.

The brewing process of lagers includes the step of cold conditioning which is not applied to lagers. The word lager has its roots in the German term “lagern” which translates to storage.

Lagers were historically brewed in Central European caves where the cold temperatures allowed the beer to be stored for a longer time compared to the warm conditions of ale storage in other parts of the world.

The effect on the finished product was quite discernible, as lagers had a finer flavor and stronger clarity in comparison to ales.

It is widely believed that this quality was discovered accidentally when lager was left in brewing caves for more extended periods than intended.

This step was subsequently adopted by lager brewers, and it is now considered crucial to the entire process. The conditioning period ranges from four to ten weeks.

The cold conditioning allows more of the hops, yeast, and protein to settle out of the brew to improve the lager’s clarity substantially.

It also reduces the chill haze which arises when an ale that has not been subjected to cold conditioning undergoes cooling for the first time where the extra solids cause the haze effect.

Hops are generally present in most beer varieties. Ales and lagers tend to have hops in varying quantities. As lagers go through cold conditioning, the finer flavors of hops tend to be prominent, and they produce a more delicate aroma.

Hops in ales tend to be in higher quantities particularly because they protect the brew as it is exposed to higher temperatures. Since ales are brewed faster, the hops cause a more bitter flavor although this characteristic is appreciated by ale drinkers.

The fundamental ingredients of beers are grain, water, hops, and yeast. In 1516, a beer purity law was adopted in Germany called Reinheitsgebot, which recognized water, grain, and hops as the beer ingredients.

Yeast was, unknowingly to the brewers at this time,part of the process. In the 19th century, scientists including Pasteur, isolated the lager yeast and credited it with the beer’s fermentation.

The culture of lager-brewing in Europe is deeply ingrained in society, and for centuries, brewers have depended on the basic ingredients and processes to make beer.

Major breweries in America have experimented to a certain extent especially with grains although the process has remained generally the same.

The development of ales has been relatively more experimental. Hundreds of sub-varieties of ales have cropped up across the world ranging from IPAs to stouts.

Ales seem to develop as far as the imagination of the brewer. Additional ingredients include specialty grains and fruit flavors. The beer sector is flooded with unique aromas and varieties.

The colors of ales range from a reddish amber to a rich gold. Most drinkers can distinguish ales because of these darker hues and a cloudy appearance. Lagers have colors in the range of pale to medium.

The colors are not definitive however as there are many sub-types in lagers and ales. Some blonde ales have the pale appearance of classic ales.

The color of a beer ultimately comes down to the malt bill used in brewing and not in yeast. Additives like spices and fruits also influence the color of a particular brew.

Ale yeasts produce more phenols and esters in the course of fermentation which gives ales the non-malt and non-hop flavors it is known for. Ales are also fruitier.

Belgian ales, for example, give off an aroma of pepper and cloves. A German hefeweizen is renowned for its bubblegum and banana taste while English ales are rich in floral and perfume-like aromas.

Ales contain a higher level of alcohol and more prominent bitter tones because of the higher amounts of hops. Lagers are known for their crisp flavors because of higher sugar levels.

These qualities are influenced by the yeast used as well as the brewing practices associated with lagers.

In the 1980s, American homebrewers started dividing brews as either “ale” or “lager” depending on the type of yeast which solidified the differences between the two brews. Lager and ales share several similarities as well.

Although lagers have historically been fermented at cold temperatures, they can be brewed at warmer temperatures. Lagers enjoy more market share while ales have been experiencing a rise in popularity in micro-breweries.

Excellent write up. One of the things I’ve found interesting of late, is the perception that lagers really need to be fermented cooler then ale’s. Seems to be quite a bit of discussion on creating lagers that have been fermented in the mid to upper 60’s, with no noticeable difference when compared to a lager that has been fermented in the more traditional mid 50’s temperature.

I can tell you I recently brewed a lager that was fermented in the low 60’s, and it turned out quite well. I would never not brew a lager, just because I couldn’t ferment in the lower temperature range.