Is it Illegal to Brew Beer at Home?

The homebrewing community has been expanding rapidly in the US, and hobbyists now have more information about the practice than ever before. 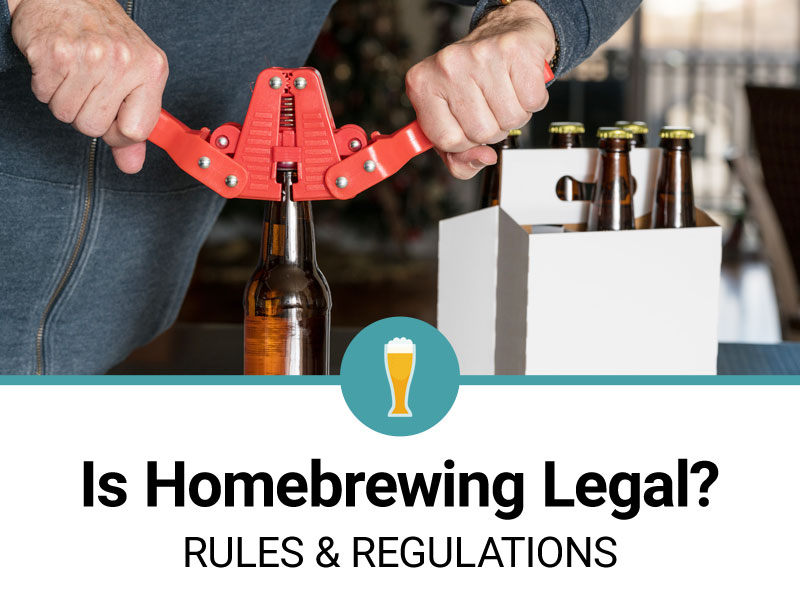 It is estimated that over a million Americans craft their beer or wine every year, and there are more than 2,000 homebrew clubs scattered across the country

Homebrewing was legalized by Congress in 1978 when the Internal Revenue Code was amended to allow adults to make beer for personal use without paying any tax.

The regulation of alcohol production is, however, up to individual states. Although federal law allows for the manufacture of beer for personal use, therefore, it has to be done per the regulations of your state.

After years of lobbying, Alabama and Mississippi legalized the hobby in 2013 to make homebrewing legal in all states.

Different states have peculiar statues, however, that place limitations on what homebrewers can or cannot do.

In some states, for example, you cannot remove the brew from your house, which locks out some enthusiasts from interacting with the local homebrewing community.

The fundamental rule that governs homebrewers is that their product cannot be sold. Hobbyists are thus spared of the regulations that commercial brewers must follow.

Note: this article should not be considered as legal advice! Please consult your local authorities for more information about homebrewing!

Do You Need a License to Make Beer?

Homebrewing is legal, and you don’t require a license to pursue the craft.

A homebrewer without a license, however, cannot exceed the quantities allowed in their state.

You will also have to get a permit if you intend to sell your beer.

How Much Beer Can You Legally Brew at Home?

Federal law allows a household to make 200 gallons of alcoholic beverages without distilling. If you want to produce more of the allowed amount, you will have to obtain a license and pay excise taxes.

Every state is allowed to institute more regulations to cap the amount of brew that homebrewers can produce.

Most states permit the production of 100 gallons per adult annually and a maximum of 200 gallons if several adults are living in a household.

It is advisable to check your state’s caps to avoid being in violation.

Is Homebrewing Legal in the UK?

The UK has a fascinating history with regards to homebrewing.

The hobby was first regulated in 1880 when households were required to have a license in addition to registration and inspection. The hobby continued in earnest, however, with villagers sharing equipment and ingredients.

Although homebrewing had been a tradition, homebrewers were demoralized by being taken to court. The practice diminished in the early 20th century until the 1880 law was abolished in 1963.

Homebrewing equipment and ingredients became accessible too, and there were an estimated 2 million homebrewers in the country by 1978.

The industry witnessed a boom in the 1970s and 1980s but collapsed in 1986. The 2007 financial crisis, however, made homemade beer cheaper than a commercially-produced brew, prompting a resurrection of the craft.

Today, there is a homebrewing boom in the UK, facilitated by the internet. Enthusiasts can exchange ideas and source ingredients from the US and other markets.

Legally speaking, brewing beer at home for domestic consumption can be done in unlimited quantities. Distillation is legal as long as you obtain Revenue and Customs.

It is important to know that commercial brewing and homebrewing are subject to different sets of rules in each state.

Regardless, homebrew cannot legally be sold to anyone including those found in the same brewing community. This is a golden rule and actual rule that everyone involved in making brew at home should take note of.

As such, homebrewers are exempted from numerous brewing regulations imposed on commercial brewers.

This privilege is only limited to preparing and consuming homebrew but not selling the final product to other consumers. Keep in mind that not selling homebrew helps you evade regulatory scrutiny.

However, best practices when making your brew for consumption at home must be observed at all costs. One of the best practices entails water management.

As a homebrewer, you are advised to use the same water used in making brew to water your garden or yard. If not you should dump it down the drain properly.

But brewing effluent such as waste from the final brewed product must be dumped into a storm drain or large water bodies.

If you are living in drought-prone states, water conservation must take priority

Is it Legal to Sell Home Brewed Beer?

Homebrewing might be legal, but only if it is done for domestic use. Some states allow homebrewers to take the beer out of the house for organized tastings, which include homebrew club meetings and competitions.

If you want to share your beer, it must be done as a gift, and nothing should be exchanged for it. This rules out barter trade involving homemade beer.

Selling homebrewed beer is illegal as states have to regulate the sale of food products heavily. Food and beverages made for commercial states are subject to inspection and certification.

If you want to sell homemade beer, the first step is to ensure that the district you live in allows homebrewing.

You have to establish yourself as a brewer by sending a notice to the Federal Tobacco Tax and Trade Bureau that regulates compliance on packaging, warnings, and alcohol content.

You will also need to register to pay taxes from sales.

You can apply for a state license if you meet the requirements spelled out by the alcohol control board. You may also need a county and district license and other additional licenses to sell your brew via local stores.

Homebrewing is a rewarding hobby, but it is subject to rules and regulations. It is legal to craft homemade beer in all US state as long as you only produce the allowed quantities every year.

Every state is allowed to place more restrictions, and some enthusiasts have had to move to friendlier territories to enjoy their craft.