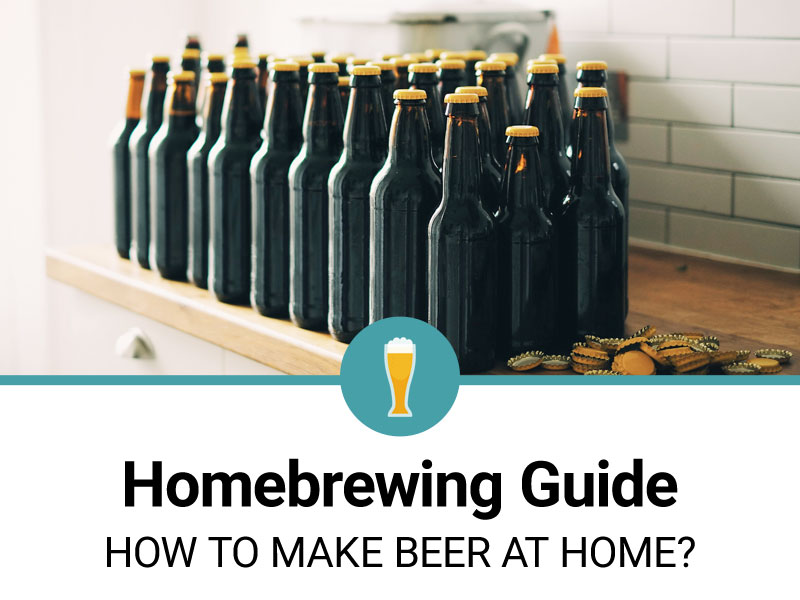 How to Make Beer at Home?

Homemade beer can be superior to store products due to its lack of preservatives, rich flavor, and dense foam. Simply put, homemade beer packs all of the necessary ingredients and nothing else. Most people assume that real beer can only be made using expensive equipment and a mini-brewery.

You only need a handful of essentials including:

The following steps will guide any aspiring home brewer in making homemade beer:

Beer brewing enthusiasts commonly say that 75% of brewing is excellent sanitation. This step cannot be emphasized enough, as it will enable you to brew quality beer without odd colors and unwanted flavors.

You should clean all the equipment with warm, lightly foamy water. Ensure that the type of foam you use will get into the crevices and the seams of the brewing devices. The equipment should then be rinsed to get rid of the soap residue. For sanitization, you can use household bleach in the ratio of 1 tablespoon per gallon of water.

To sterilize the bottles, you can fill them with a little water and put them in the microwave to let the water boil. You can also place them in pots of boiling water on the stove. Your homebrew kit will more often than not pack some sterilizing powder. Pour the sterilizing solution in the bottles and shake such that it covers the whole surface.

You will first need to choose the grain by determining the flavor you want. Select appropriate specialty grains, and you can even choose one type. The grain can be milled when you are purchasing it, or you can crush it yourself using a rolling pin.

Do not crush to get a flour consistency but a course texture instead. A malt mill can be bought later as you make more beer at home.
Pour the cracked grain in a nylon mesh bag or a cheesecloth and tie at the top.

Heat 2.5 gallons of water or even more in your kettle and get ready to add the grain as the water gets hot. Drop in the grain-filled cloth and turn the heat down low. The objective here is to make a grain infusion by holding the crushed grain in the water between 160 and 170 degrees Celsius for 20 to 30 minutes.

Keep the water below 180 degrees Celsius so that the tannings in the husk do not get dissolved into the wort. Pull the bag out with a strainer or tongs and be careful not to squeeze it to maintain the integrity of the husk.

The steeping will leave the water with a shade of brown. You will subsequently bring the pot to a low boil. The next step is to pour in the malt extract which will be pre-portioned to assume the consistency of molasses which means that you have to be patient to get it all. You can even rinse the tub with warm water to make sure you add the last of it to the brew.

Your water is now officially “wort” which means unfermented homemade beer. Bring your wort to a slow, gentle boil like you were boiling chicken soup. Let the solution boil for 55 minutes before adding the hops.

The next step involves adding your bittering hops to a muslin bag in the grains. Tie and suspend the cloth in the boiling wort for 90 minutes. The hops are meant to dilute the sweetness of the malt. Fifteen minutes into suspending the bag, add a whirfloc tablet for sanitation.

Boiling the hops for 90 minutes will eliminate about 80% of the Dimethyl Sulfide (DMS) which is a byproduct of the process of fermentation. If your beer smells of creamed or cooked corn, it is an indication of the presence of DMS. Keep the lid off so that the DMS escapes.

Letting the wort cool on its own will take hours. You can expedite this process however with a wort chiller. Counterflow or plate chillers tend to perform better than copper immersion chillers particularly in getting rid of DMS.

The wort should be cooled as fast as possible to eliminate the DMS effectively. DMS is produced even as the wort cools down and as long as the wort is hot, the production of DMS can reach a 30% increase each hour.

Wort chillers are however expensive, and you can opt to chill the wort in your sink. This method is suitable for five gallons or smaller of wort. Cover the brewing kettle and submerge it into cold water in the sink. To expedite the process, change the cold water after several minutes. Also, stir the wort with a spoon with each change of water.

Once you can comfortably dip a finger into the wort, add ice in the water. You will require three to five pounds of ice for a gallon of wort for fast cooling. Keep adding ice as it melts when also changing the water. You can use a sanitized thermometer to keep track of the temperature of your wort.

After your wort cools down, it is ready to be transferred into the fermenter. There will be substantial amounts of hops, cold break, and hot break in the bottom of the brewing pot after boiling. You can opt to remove the break before fermenting.

Your fermenter should be slightly larger than the batch size to give the beer space to foam and ferment without generating so much internal pressure such that the fermenter is compromised.

6. Determine the Original Gravity of Beer

You have probably heard the term gravity get thrown around by home brewers. It refers to the gravity of their beer recipe measured throughout the brewing process. The initial gravity is a measure of the unfermentable and fermentable substances in the wort before fermentation.

These substances are typically the sugars that will be fermented to alcohol. When you determine that the level of sugars is reducing, you will be certain that fermentation is taking place. This gravity will give you an idea of the alcohol content that will be present in the final product.

Determining the initial gravity will come in handy in calculating the Alcohol by Volume (ABV) level, a measure of how much alcohol your product could potentially contain. Fermentation is basically the conversion of sugars to alcohol, and you can estimate the amount of sugar being converted by the reducing amounts of specific gravity.

A hydrometer can be used to determine this gravity which works by displacing liquid according to its density and calculating the amount of the fluid displaced. Hydrometers present the least expensive and simplest tools for measuring gravity.

A refractometer is the other option, and it works by determining the light refraction through the solution. This calculation is used to estimate the level of sugars present.

7. Activate and Add the Yeast

Homebrewers commonly use the term “pitching the yeast” which basically means the addition of yeast in the wort to trigger fermentation. Wort has a substantial level of sugars, and when yeast interacts with sugar in a solution, more yeast is produced to produce alcohol.

You should activate yeast depending on the type you will use. Dry yeast needs to be re-hydrated in water since the sugars in the wort are often highly concentrated that the yeast cannot suck inadequate water to re-launch their metabolism.

To rehydrate the yeast, drain a single cup of boiled warm water into a sanitized bottle and stir in the dry yeast. Cover with a wrap for 15 minutes and add a tablespoon of extract or sugar previously boiled in little water. Place the solution while covered in a warm space free of direct sunlight. The yeast will be visibly foaming after 30 minutes or so and will be ready to pitch.

Liquid yeast has more yeast strains than those available in dry yeast and is therefore considered to be superior. You can make a starter which allows the yeast to multiply and primes it for the fermentation process. Most companies are however manufacturing yeast coded with a use-by date and which are produced at high cell counts making it unnecessary to pitch them to a starter.

Seal the fermenter and place it on the ground to rock it for several minutes. This allows the mixing of the yeast and the wort and also provides a greater amount of dissolved oxygen that will encourage the growth of yeast. You can then place the airlock and rubber stopper on the fermenter’s lid.

Sanitizer solution should be placed to line in the airlock although you can use boiled water or vodka.

You should subsequently let the solution sit for about two weeks. Active fermentation typically starts between 12 to 24 hours, and you should see the airlock bubble regularly. The airlock allows the CO2 generation from fermentation to escape without letting bacteria or air in. Successful fermentation depends on maintaining temperatures in the right range, pitching adequate yeast, and using good wort nutrients.

Getting these factors right can hasten primary fermentation in as little as 48 hours. Do not lift the lid to peek however when the bubbling slows down as the solution is still vulnerable to bacterial infections. You should keep the lid on and use the airlock hole to peek.

Any oxygen seeping into the beer will affect its taste. In this case, secondary fermenters are superior to primary ones. If your beer sits in the primary fermenter for too long, dead yeast gathers at the bottom and are fed on by the live yeast as the sugars reduce further.

This scenario leads to a process termed as “autolysis” which will cause off-flavors. Secondary fermentation is not without its cons as it presents another stage which can cause oxygen or bacteria to seep into the solution. If you do not intend on storing your beer for long, however, primary fermentation should be enough.

You can measure the specific gravity of the final brew one more time to know the amount of sugar contained in the solution after fermentation is over. This will help you estimate your brew’s alcohol content correctly. Beer with a low final gravity often has a dry or crisp taste while that with a high final gravity contains a sweet, malty flavor.

Your brew will be real beer at this stage although one more step will make it the product that most drinkers are used to. You will need to carbonate your brew by adding carbonating sugars and leaving it for a week. To perform this step, add corn sugars in the amounts of 3 to 4 ounces to 1 or 2 cups of water. Pour the mixture in a clean kettle and siphon the beer in from the fermenter.

When transferring the final brew to another vessel, ensure you limit the exposure to oxygen to enable the generation of carbon dioxide bubbles. To rack beer, the choice is between bottling and kegging. Bottling is the less costly option as kegging requires buying a keg.

Bottles can however not handle the carbonation process as kegs can. Depending on your choice, you need to make sure that the brew does not absorb large levels of oxygen.

What Are Your Thoughts?
Cancel reply

How to Use a Hydrometer to Measure Alcohol in Beer?

All Grain vs Extract Brewing – Which Should You Use?