Beer is the most common alcoholic beverage consumed throughout the world. Statistics shows an increase in global production of beer in the last decade. 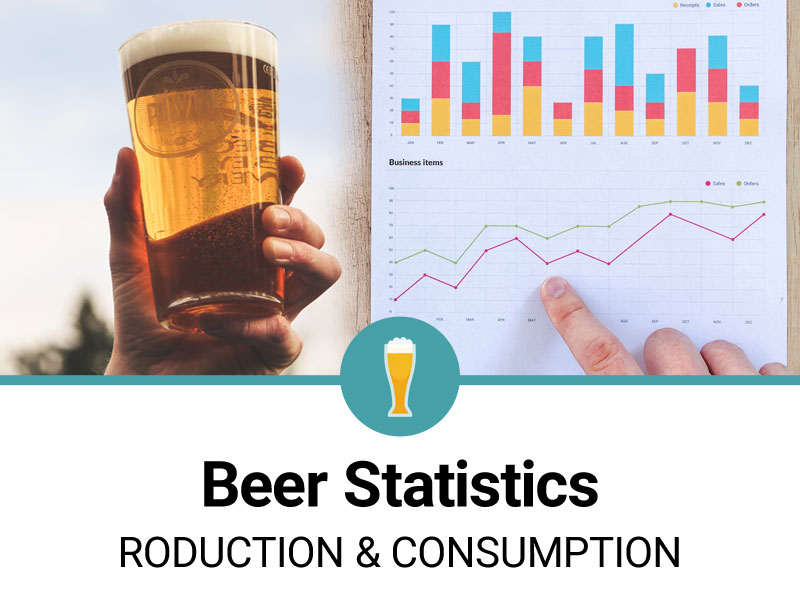 There is also a high population of people who take beer at home after meals.

Excess use of alcohol, however, is harmful for one’s health. It can lead to impaired judgment as well as addiction.

In this article, we will focus on beer production and consumption statistics in five major areas, US, EU, Canada, Asia and Australia.

However, between 2010 and 2018, the beer brewery expansion industry has been sluggish and slow compared to the past, although new breweries are still finding market opportunities and growth in the beer market.

Increase number in breweries and distributors has led to an increase in the number of retail outlets that sell beer. In the year 2008, there were 531,705 retailers’ outlets in the US. This has risen to 643,268 by the end of 2018, a survey done by Nielsen.

In the US, beer is the most preferred beverage of choice compared to wines and spirits according Gallup Poll. A survey conducted by Gallup shows beer has maintained a market stability in consumer preferences over the past ten years.

Beer sales went down in 2018 compared to 2017 in the US. Most of the beer is locally produced, 82% while 18% is imported. The number of people over the age of 21 and considered legal drinkers has steadily increased over the last decade. Although the sales went low in the year 2018, there was an increase in the number of beer breweries, distributors and retailers.

One of the factors that has led to a boost in the beer industry in the EU counties, is the increase number of exports. 22% of the beer produced in the European countries is being exported to other countries across the globe. Europe’s reputation for producing quality beer has led to an all-time in beer production and export in the year 2018, 412,221 compared to 407,961 in 1000 hectolitres.

There are now a predictable 9,500 active breweries in the European Union not counting Turkey, Switzerland and Norway. The new breweries companies are creating a diversity in the beer industry, creating a high quality range of beer brands, flavours and styles. One of the trend that is on the rise, representing around 6% of the overall beer market in the EU, is the production of beer with lower or non-alcohol content.

Beer industry contributes to a big percentage in the general economy of the European Union. There are over 131,070 people employed directly in the beer industry. This number has risen over the years from 2012.

The industry also contributes to the economy of the countries through excise duty revenues.  The amount of revenue collected from the beer industry in most of the countries in the EU has risen significantly with millions of euros.

This is a huge growth of 21.8% and it is the highest recorded in the history of beer brewing in Canada. Most of the brewing facilities sprouting up in the year 2018 are small and local, producing less than 15,000 hectolitres of beer.

On the other hand, although beer production is increasing in Canada, beer consumption and selling recorded a decrease in the year 2018 compared to 2017 and the preceding years. In 2018, beer produced locally in Canada decreased to 21.65 million hectolitres which is a 3.4% decrease.

Beer important from other countries also decreased by 3.4% in 2018 compared with beer imports recorded in the year 2017. Generally, beer consumption and sale decreased from what was sold in 2017 by 0.3% which is approximately 22.1 million hectolitres in 2018.

The beer industry in Canada is getting more accustomed with promoting a better environment. For this reason, since 1990, brewing facilities in Canada have recorded a 61.2% decrease in greenhouse gas emissions. The facilities have also opted for more environmental friendly ways of energy generation and use.

The beer industry has a significant effect in the economy of Canada. The industry has employed close to 149,000 Canadians. It also contributes billions of money towards Canada’s GDP and labour income.

The beer industry in Asia is different compared to the more developed nations. Beer consumption is not a common thing in Asia and there are attempts by most governments to keep beer consumption low.

However, beer market in Asia has opportunities for growth. This is because most people in Asia are young and the highest population is middle class.

Five countries cover around 85% population in Asia. Therefore, we will focus on beer statistics in these five countries, Thailand, Philippines, Malaysia, Vietnam and Indonesia. Beer consumption and growth is highest in Vietnam compared to other countries.

Beer production varies in the five countries. In Vietnam, Philippines and Thailand, most of their beer produced locally, but in Indonesia and Malaysia, the beer market, production and distribution is controlled by international players.

Since beer consumption in Asia is not popular, beer is supplied to the end consumers through a supply chain. Raw materials are distributed to microbreweries or local manufactures. The microbreweries sell directly to retailers, while local manufacturers, distribute to wholesalers who then sell the beer to retailers. Imported beer is sold in Asia depending on the laws and regulations that govern beer importation and distribution in each country.

Alcoholic beverages is highly discouraged in Asia. The governments of the different countries invests a lot in campaigns to discourage beer consumption. In addition, it enforces harsh laws to discourage the production sale and consumption of beer.

On the contrary, the beer industry has been a great source of tax revenue for each of the five countries and it is expected to continue increasing since the year 2016.

Beer industry in Australia continues to grow year by year. The number of local small brewers are increasing gradually by year. However, beer production in Australia is mostly controlled by 3 major local brewers, Coopers Brewery, Carlton & United Breweries and Lion Beer Australia that account to about 79.4% of sales.

Australians are now drinking less alcohol compared to the past. Unlike 40 years ago where three quarters of alcohol drinkers consumed beer, today 39.2% of the beer consumer population take beer, 38.3% wine, 18.1% spirits and 3.4% cider. There is also a huge market demand for non-alcoholic beverages produced by the beer industry.

The Australian government imposes a very high tax duty on beer. Australians pay the fourth highest tax on beer in the world. Tax accounts for almost half the price of a full strength cartoon of beer. In addition, the tax exercise rate for beer is habitually increased in Australia after every half an year.

The beer industry contributes highly to the agriculture sector in Australia. Most of its beer is produced locally from crops such as yeasts, barley and hops. Barley is the most common crop grown in Australia after wheat.

The country is known worldwide for producing high quality malting barley and hop that is exported internationally for beer brewing.

The beer industry is an active economic driver in Australia. Most of the beer is produced locally which supports other sectors of the economy such as agriculture, materials and packaging, transport industry, administration and marketing and sales.

Beer industry in Australia continues to grow increasing the GDP, with the brewing companies vowing to ensure they protect the environment in the course of production.

The beer industry is a promising market that has potential opportunities for expansion and growth worldwide. The industry contributes a lot to the economic growth of a nation through tax revenues, jobs and promoting interlinked industries, such as agriculture, tourism and transport.

With the current campaigns and proper advertising, most people are becoming responsible drinkers and the percentage of underage drinkers is reducing year by year. The beer industries are also committed in protecting the environment by finding safe methods of producing and brewing beer.

I just want to have some data on African beer production and consumption trends.
WR