Why Do People Drink & Enjoy Beer? 7 Reasons to Consider

Though beer remains the most popular alcoholic drink, some people steer clear of it. This is because of the many myths surrounding the drink. 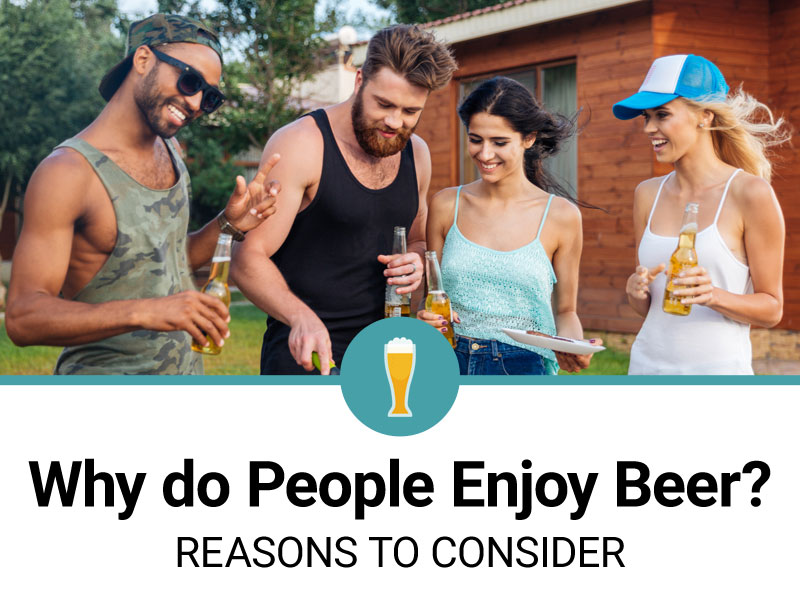 The most common are its association with a potbelly and the empty calories it will give a drinker.

Beer is, however, more than the misconceptions that people associate with it. There are multiple reasons for the worldwide popularity of beer.

The following are reasons you should consider:

1. Beer Has a Long History

Beer history is as long as human civilization. A few anthropologists even believe that man changed from being a hunter-gatherer into an agriculture-based lifestyle solely to grow grain for making beer.

The first barley beer that was chemically confirmed dates to the Iranian empire in the 5th millennium BC. This was recorded in the histories of Mesopotamia and ancient Egypt.

All cereals, however, contain sugars that can undergo spontaneous fermentation following exposure to air-borne wild yeasts. It is thus possible that all tribes and cultures made their beer from a domesticated cereal.

During the industrial revolution, beer brewing moved from a domestic to industrial manufacturing. This was supported by the invention of thermometers and hygrometers that allowed optimal control of the brewing process.

The long history of beer makes it an essential part of human life. In fact, in 2006, the beer brewing sector sold over 35 billion gallons and generated a total global revenue of $294.5 billion.

Humans love variety. While most drinks are only available in one offering, beer comes in multiple flavors to suit the palates of all drinkers. The seven major categories of beer flavors include:

On a hot day, people would rather get a cold beer than any other drink. This is because of its refreshing nature.

According to researchers, the refreshment from cold beer is associated with the chemical reaction that happens in your mouth.

This reaction will turn the carbon dioxide bubbles in beer into carbonic acid. This acid is what refreshes you rather than the bubbles in your beer.

Someone once said that there is nothing like bad-tasting beer. Some beer brands and types just taste better than others.

Researchers set to find out why beer tastes so good and came up with interesting results.

According to a study in the Cell Reports journal, yeast is the primary element that gives beer a unique taste.

It produces the aroma compounds that determine the taste and overall quality of beer. The yeast type used in beer explains the taste difference between wines and beers.

5. Beer is Great for Social Life

Beer is known in social circles as awesome water, liquid courage and survival juicer. For those with social anxiety, alcohol can take up more names than these.

This is because moderate consumption of beer is linked with improved social interaction. In a study in the Adaptive Human Behavior and Physiology journal, researchers considered whether the venue and frequency of beer consumption affected the subjects’ well-being.

The study concluded that people who frequently visited a pub were more content and socially engaged. It also showed that people who drink beer in local pubs engage in conversation which boosts their social well-being.

Strong social networks are the primary buffers against physical and mental illnesses. Beer is thus among your best choices for a great social life.

With the world being health-conscious, some people are advocating against beer consumption.

When taken in moderation, however, beer has been shown to fight inflammation according to a study in the Molecular Nutrition and Food Research journal.

Moderate beer consumption has also been associated with improved digestion, strong bones, a healthy heart and protection of the brain cells.

An article in the Clinical Journal of the American Society of Nephrology showed that the consumption of punch and sugary drinks increased the risk of getting kidney stones.

Moderate beer consumption was, on the other hand, found to reduce the subjects’ risk of getting kidney stones by 60%. This means beer consumption might be a healthy option for your kidneys.

If you are looking for a nutritious drink, then beer should be your first choice. It contains B vitamins, potassium, thiamine, iron, calcium and zinc. The B vitamins in beer include niacin, riboflavin, pantothenic acid and vitamin B12.

Light beer contains the same amount of minerals and vitamins as standard beer. Even so, light beer has fewer calories and a lower alcoholic content compared to the latter.

Beer also contains fiber comprising 0.2-1% of its total weight. The dietary fiber in beer is derived from soluble fibers that will readily dissolve in the liquid.

Most of the fiber comes from compounds known as beta-glucans. These compounds maintain healthy cholesterol and sugar levels. They also reduce your risk of contracting type 2 diabetes, heart disease, and digestion issues.

The benefits of beer are primarily linked to the amount that you consume. Drinking heavily might cause liver disease, depression, cancer, unhealthy weight gain, cancer and even death.

A standard beer in the U.S is 355 ml {12 ounces}. One or two of these daily will have several health and social benefits.

A few people erroneously assume  that beer is only loaded with preservatives and chemicals. They thus might not be convinced of the above and other reasons for its popularity.

Beer is nonetheless natural as milk or freshly squeezed juice. It needs no preservatives to remain fresh. The hops and alcohol in it are natural preservatives.

With the current focus on natural and healthy food options, beer will make one of the best inclusions in your diet.