What is Malt and Malted Barley in Beer Brewing?

Home » Guides » What is Malt and Malted Barley in Beer Brewing?

The malting process is a vital step in beer making as it is when the sugars are fermented into beer. 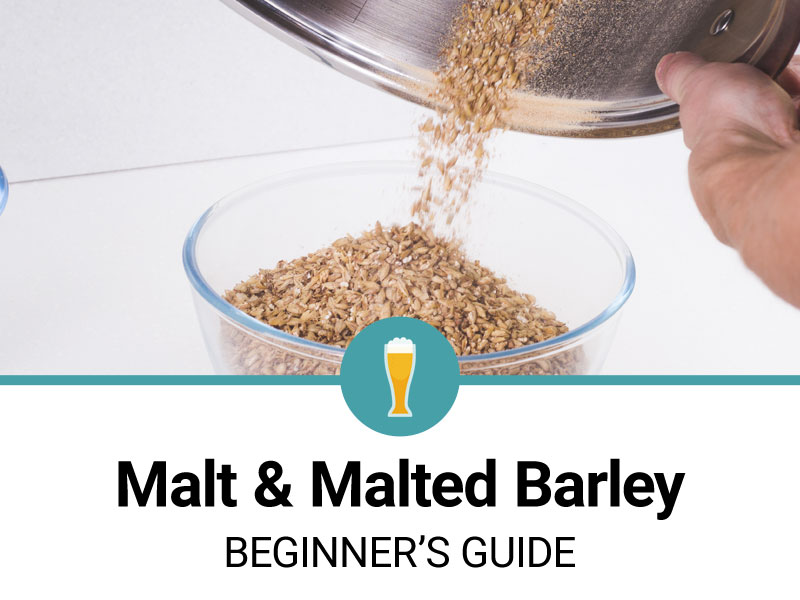 Barley is popularly used to brew beer, but the starch in barley is not ready for fermentation.

It has to be converted into malted barley, where it is soaked and allowed to germinate.

Heat is then applied to stop the grain from growing into new plants.

The amount of heat impacts the beer’s flavor. Dark beers, for example, are brewed from deeply roasted malts.

What is the Difference Between Barley and Malted Barley?

Barley is a cereal grain in the same class as wheat and millet. Barley is a short-season crop, and it has been used for centuries as food or fodder.

Malt refers to a dried grain with a small sprout. You can get malt from different kinds of grains, but barley is preferred in the production of beer.

To make malted barley, grains are moistened in a warm environment to trigger germination. The seeds release a host of beneficial enzymes that can convert starches in the grain into sugars.

The grain is allowed to grow for a specific time, after which it is exposed to heat to stop germination. This process is called malting, and it results in malted barley.

The Process of Making Malted Barley

The malting process starts with the selection of high-quality kernels. A professional maltster judges the grains’ looks and feel as well as their protein and moisture content.

The malting process unfolds over the three steps discussed below:

The maltster starts by cleaning the grain and immersing it in water. The water drained, and the grain is allowed to rest in the air for its water content to increase.

This step needs a skilled maltster since the water to oxygen combination must be precise.

It is easy to drown the barley seed, and the grain should absorb only enough moisture to germinate.

The embryo in the barley kernel begins to germinate at about 35% moisture content, but a level of 46% is needed for the complete modification of the starch in the grain.

The growth and modification of the seeds occur in the germination stage. In traditional malting, the grains were spread out on beds and turned by shovels to discourage heat build-up.

Modern breweries use germination vessels, and air is blown across the bed from the underside. The vessels are often equipped with a mechanical turner to keep the grain loose.

The pre-determined moisture content has to be maintained, and a specific temperature is used during germination.

Sprouting may not take place if the conditions are too hot or cold, and mold may grow in wet and warm conditions. The grains must sprout at the same pace, so the maltster must keep inspecting them.

The process takes 4-6 days, after which rootlets and a shoot can be seen emerging from the grain. The result is called “Green Malt”.

A skilled maltster can assess the degree of modification by looking, feeling, or smelling the grains.

The green malt is transferred onto the kiln to discourage further germination. Convection heat treatment is used to reduce the grain’s moisture content and prepare the malt for flavor development.

Kilning uses different combinations of heat and airflow, depending on the variety of malt being made.

The blend used to produce an ale malt, for example, is different from the air/heat combination used to make a lager malt.

Traditional kilning used a lot of energy. Modern kilning vessels use less power, but the process is still energy-intensive.

The product from the kiln is called malt, but it cannot be used as it is. It is passed through a deculmer machine to remove the rootlets that sprout during the germination process.

The malt is stored for a specific period before being used.

How to Make Malt at Home?

It is possible to make malt at home using barley and water. You can get un-malted grain in feed stores, pet shops, and equestrian specialty stores.

Homebrewers can make their own malt by following the steps below:

You can use a large bucket to soak the barley. Keep in mind that the grains will expand as they absorb water, and you should leave half of the bucket empty.

You may have to perform the procedure for another cycle to see rootlets developing at the kernel’s base. You can stop steeping once 95% of the grains have germinated.

The grains need a cool, well-ventilated, and slightly moist environment to germinate. The ideal temperature is 18 °C or 64 °F.

You can spread out the grains on baking sheets placed in plastic bags—mist and turn over the grains every 4-8 hours.

Germination takes two to five days, and it is evaluated by the growth of a small leaflet in the grain called an acrospire.

Split the grain open and check if the acrospire’s length is 80-100% that of the grain.

You can dry the malt with a food dehydrator or an oven. The ideal drying temperature is between 31-50 °C (90-125 °F). You can also sundry the malt if you live in sunny conditions.

Malted grains should have close to the same moisture content as un-malted ones.

Can You Buy Malted Barley?

Yes, you can buy malted barley to make beer at home. This 2-Row malted barley by Briess is fresh and well-modified, and it will work with most brewing recipes.

Malted Barley vs Malt Syrup – Which is Best to Use for Brewing?

Malt syrup is derived from malted barley, and it is popularly used as a sweetener. You can use the syrup to make beer by adding hops, yeast, and water, and waiting a few weeks for ready beer.

Your brew will, however, lack the unique characteristics that make beer made with malted barley as excellent as it is.

Malting barley is a technical and demanding process, but adventurous homebrewers can take on the challenge at home.

Be careful not to drown the seeds and do not let them germinate into plants. If the process seems too challenging, you can buy malted barley or malt syrup.